It took us a long time to decide whether we wanted to include selling products as part of our collective work but we hope you agree with our decision:
Read More

24 May Our “Make it up!” workshop at Tate Britain

Posted at 21:29h in All by Craftivist Collective 0 Comments
1 Like
Exploring the relationship between art and politics, Craftivist Collective’s Sarah Corbett was asked to and then ran a great workshop with Tate Forum, Tate Britain peer-led youth group, in response to the Art for Whom? display and current exhibition: Susan Hiller.

Posted at 11:34h in All by Craftivist Collective 0 Comments
1 Like
12 May: It’s been one year since the new Coalition government pledged to make fares fair. So today, with Better Transport campaigners we presented Transport Secretary Philip Hammond with a giant hand-stitched fair fares petition, and asked him to keep his promise. Find a video of the day here made by Marc of Vision TV

Bright and early this morning, we were joined by Fair Fares Now campaigners and Climate Rushettes at a protest outside a key rail industry conference in London.
Read More

Posted at 11:46h in All by Craftivist Collective 4 Comments
1 Like
Another project for you to do wherever you are in the world at any time: Written by Craftivist Hannah Griffiths:

We have put this barbie up to raise awareness of maternal health issues in the global south but you could link it to another gender issue you are passionate about. There are so many international days, even the International Talk like a Pirate Day that the International Day of the Midwife sounds like just another pointless event doesn’t it? But this year over 536,000 women will die of pregnancy-related complications. The majority of these deaths occur in developing countries. Medically trained midwives could help to prevent this.
Read More

Posted at 12:01h in All by Craftivist Collective 0 Comments
0 Likes

If you don't have much time why not print out this image and write your own message on the placard and give it to someone, blu-tak it to a colleagues...

Posted at 21:17h in All by Craftivist Collective 0 Comments
0 Likes

Posted at 19:04h in All by Craftivist Collective 0 Comments
1 Like
In case people are not clear: The Railway Adventures joint campaign with Climate Rush has always been two actions led by the different groups. We are supporting the campaign with our train bunting petition and stitch-ins we had last weekend, 10th April. Climate Rush are delivering their train journey action Saturday 16th April. On 16th April we are encouraging Craftivists and friends to meet at Monument, London 12noon Saturday 16th April. We have made 25 metres of train bunting with the carriages  received so far (more will come in the post no doubt) which we will carry on the walk with Climate Rush to the train station. Then we will wave them off with our bunting (and collect another day) and not get on the train discount online pharmacy uk with them.
Read More 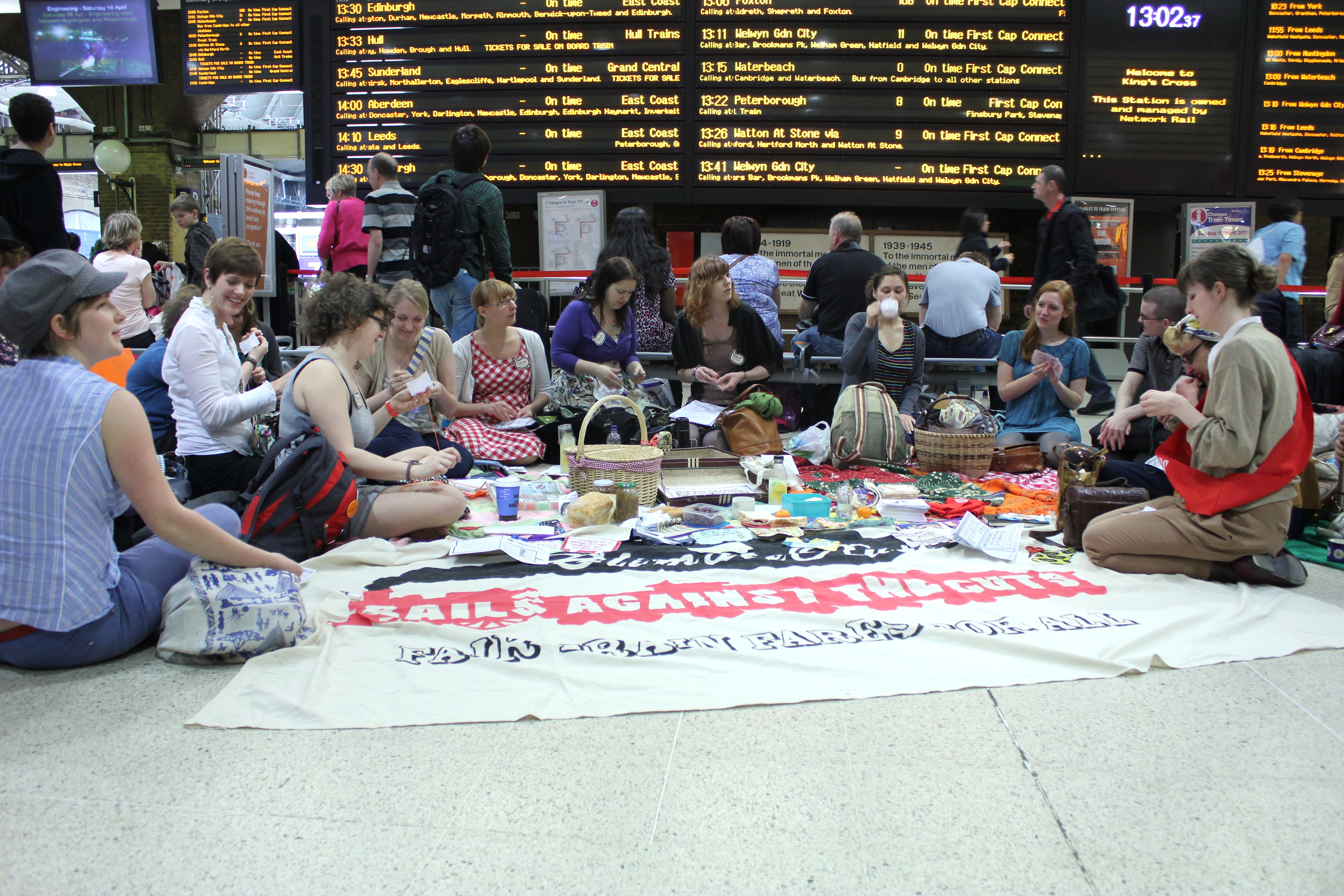 Posted at 21:04h in All by Craftivist Collective 0 Comments
0 Likes

Posted at 18:30h in All by Craftivist Collective 2 Comments
0 Likes
London based Craftivists held a protest stitch-in at King’s Cross railway station

At 1pm on Sunday 10th April, craftivists, joined a nationwide protest to demand a halt to rail fare increases.  Currently the coalition Government plans to hike fares by 31% over the next 4 years. Hundreds of craftivists (activists who protest using scissors, thread and fabric) converged on railway stations across the UK for a protest picnic and stitch-in. The event at King’s Cross brought together over 20 eager craftivists, who shared our message with members of the public who wanted to find out about the unique action.

Posted at 12:42h in All by Craftivist Collective 1 Comment
0 Likes
“I don’t get it, but I get it, if you know what I mean” A passing father’s response to the stitch-in picnic at Piccadilly train station run, by the Craftivist collective on Sunday April 11th.

Rebecca Aimée Lanyon Willmott of Craftivism Manchester and Kelly Joseph of Didsbury Green Threads, stitched their political threads together to plan the Manchester Crafting a Train of Bunting project. On April 11th this event mirrored train stations across the country, wherefellow craftivists stitched, sipped tea and picnicked in peaceful protest against the proposed 31% rise in train fares over the next 4 years. The bunting panels will be fashioned into a petition-train which will be taken on a Fair Fare Railway Adventure on Saturday 16th April.
Read More