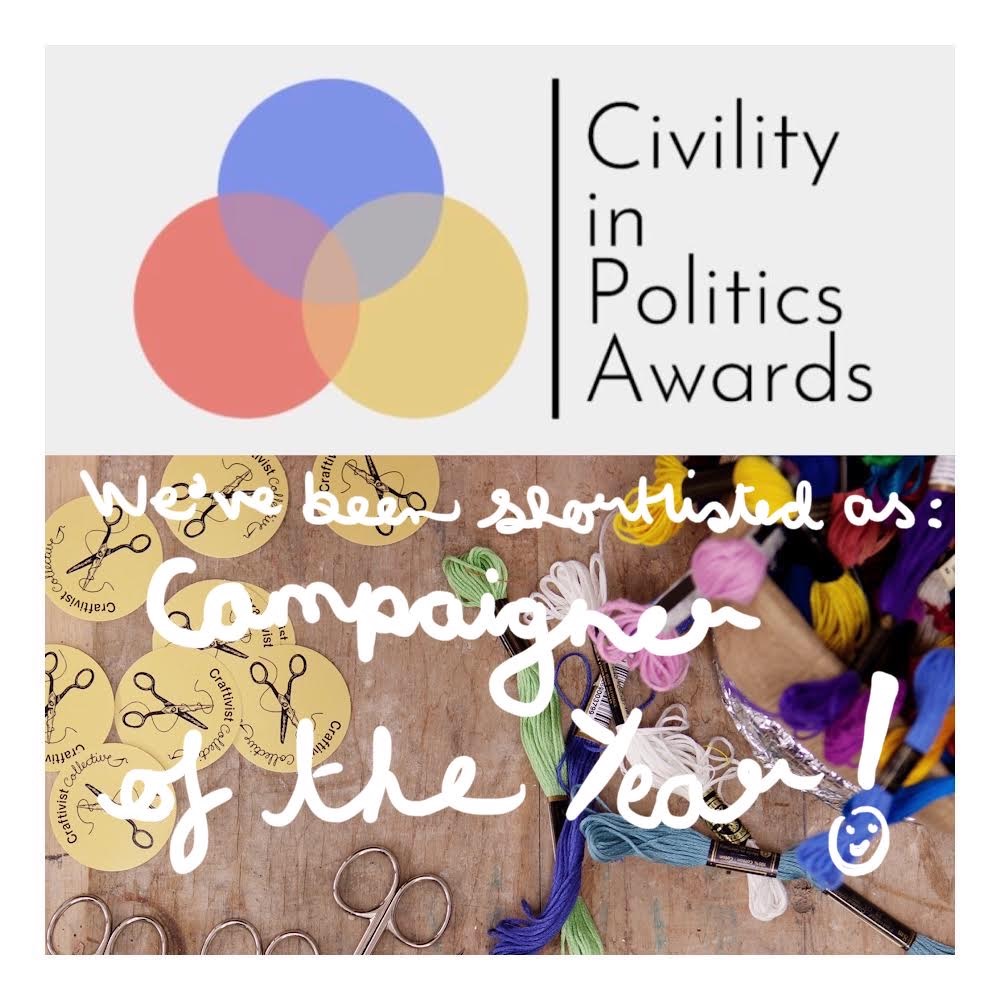 Posted at 14:52h in Uncategorized by Craftivist Collective 0 Comments
0 Likes

In June it was announced that we were shortlisted for the ‘Campaigner of the Year’ at the Civility in Politics Awards 2022 for:

The Civility in Politics awards are designed to encourage, reward and celebrate thoughtful, reflective public debate that reaches across the aisle and seeks to improve our civil discourse. Their panel of distinguished judges, drawn from across the political spectrum selected from nominees put forward by the public and we where chosen as one of the seven shortlisted for Campaigner of the Year!

“We had a bumper crop of entries for this year’s awards – over 200.
Shortlisting was a tough job for the judging panel.”

Su Moore, CEO of the Jo Cox Foundation who alongside Lord Wood sits on the steering group continued;

“When, too often, we hear about examples of discourse being uncivil,
the nominations showed that there is another way.“

The others shortlisted for Campaigner of the Year were the incredible:

The awards evening was on Wednesday 29th June last week. And also included awards for:

Politician of the Year

Bridge Builders of the Year

The staff of Civility in Politics kindly emailed me some snippets of nominations we received. Below are four of my favourite quotes (from twenty nine to chose from!)  that remind us of various ways our gentle craftivism can have positive impacts in our messy world:

Three craftivists (from L-R: teenage Esther, Rina and me: Sarah) attended the awards night in Westminster, London. It was a great opportunity to meet politicians and influencers at the event who may be able to help us with future compassionate campaigning projects 😉 It was lovely to meet many of the distinguished judges who told us how impressed they were by our Gentle Protest approach to campaigning – it was so encouraging. And it was really educational for all three of us to learn about campaigns, organisations and powerholders doing transformational work that is often quiet and we may not have heard about elsewhere.

And the winner is…

Richard Ratcliffe rightly won ‘Campaigner of the Year’ award for his successful campaign to free his wife Nazanin from unjust detention in Iran.

All of us shortlisted where genuinely so happy that Richard won and agreed that if he had not win, we would have all ‘done an Adele Grammy moment’ when Beyoncé didn’t win Album of the Year for her Lemonade album & Adele said thank you but she could not accept the award!

To meet Richard, Nazanin & their young daughter was very special & the whole evening was so inspiring, empowering, encouraging &… civil (until some of us when for dinner together afterwards!).

Hearing stories and speeches from politicians, campaigners and members of the House of Lords from very different political standpoints sharing candidly how they had worked together for a common cause, for a purpose beyond themselves and always engaging with each other in a respectful and compassionate way even during the most challenging debates was an important reminder that we can protest gently and how powerful the outcomes can be…

Thank you to everyone who nominated us and I hope you enjoyed reading this little bit of good news. More good news heading your way 1st August 😉

Ok, I have to get back to creating our epic Craftivist Collective Handbook that you can preorder here: www.unbound.com/books/craftivist-collective-handbook.