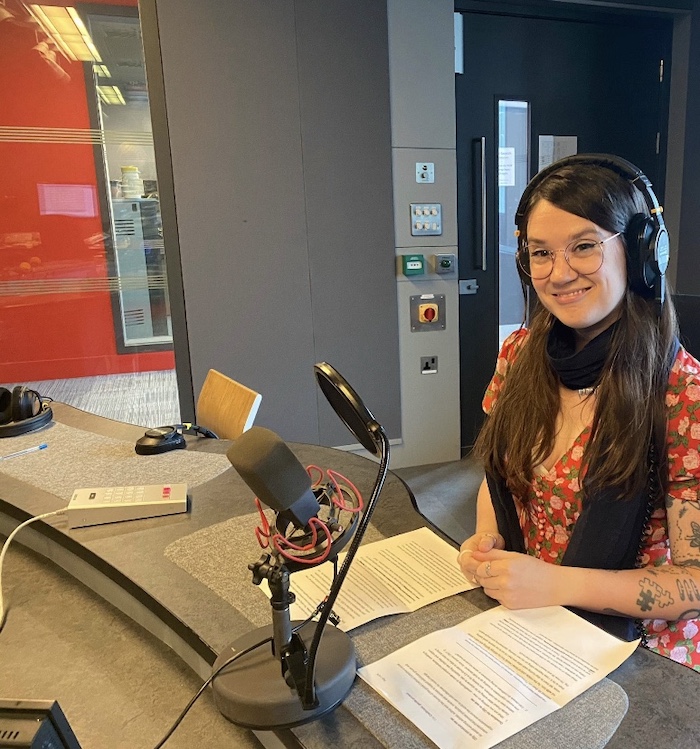 Posted at 17:40h in Uncategorized by Craftivist Collective 24 Comments
0 Likes

I’ve always been a bit sensitive. Growing up I would leave the room when my family watched Mr Bean on TV because I would get upset that people were laughing at him not with him. As the middle child of three I would find my siblings fighting and with a shaky voice; tell them to stop hurting each other and then I’d run to my parents upset asking them to fix it. I was happiest sitting on my own drawing, daydreaming and people watching. I’m now 36 and haven’t changed that much.

What many of my friends say is different about my background is that I grew up surrounded by activism. I was born in Everton, a low-income inner-city area of Liverpool in the 1980s into an activist family. My dad was and still is the local vicar, my mum was a nurse and is now a local politician. There is a photo of me aged 3 in the local newspaper alongside local residents: people of all faiths and none, outside a row of good social housing that we squatted in to save from demolition – and we won!

Aged 8, I went to South Africa as part of my dad’s sabbatical to learn from the reconciliation work of Nelson Mandela and Archbishop Desmond Tutu working across the country. Growing up I would often be at campaign meetings in our local community centre or, listening-in to the planning that went on around our kitchen table. I learnt how important the media and mobilising were, and also how vital it was to research who really had the power, and who they listened to. I also learnt how one-to-one meetings with decision-makers and finding supportive, unusual allies were just as important as the more public actions.

The first campaign I initiated was in secondary school. Students complained that they wanted lockers so they didn’t have to carry heavy bags to every lesson. I quietly asked the Head Teacher why we didn’t have them. She said it was a health and safety issue. I asked the Caretaker if that was true, and together we quietly measured the corridors and rooms and realised there was space within the guidelines. I didn’t create a petition, or plan a demonstration: instead, I asked a teacher I trusted “Who is the parent governor the Head Teacher listens to the most?” I contacted that governor with my proposal for where the lockers could be placed, to satisfy health and safety regulations, and asked if he would take forward my recommendations. It took some months, but we got the lockers. That  experience told me that loud, public protest isn’t the only way to do activism.

As a young adult I moved to London for a job as a professional campaigner for an international development charity. I joined some activist groups in my spare time too. But by summer 2008 I was burnt out from confrontational activism, and I was doubting the effectiveness of many forms of conventional campaigning.

During that time I had to take a 5 hour train journey from London to Glasgow for work: I took a small craft kit to cross-stitch on the journey. I had never done cross-stitch before, but I watched a youtube video and had a go. Having to thread my needle made me aware for the first time how shaky my hands were, how shallow my breath, how tight my shoulders… It showed me how stressed I was: it slowed me down and calmed me down. I got into a rhythm of doing the repetitive hand actions, and once my hands knew what they were doing; my mind started thinking more deeply and constructively about how I could be a more effective activist.

The people opposite me on the train asked me – with curiosity – what I was doing. We ended up talking about my life and theirs. The crafting wasn’t a distraction. It was the catalyst for conversation and we could speak without always looking at each other which helped us open up more, listen better and have a really thoughtful conversation. I started thinking: could craft be a useful tool for activism?

The next day I googled ‘Craft PLUS Activism” and the word ‘craftivism’ popped up. It was coined by Betsy Greer in 2003. There wasn’t any projects or groups I could join, but she gave me permission to use the word and so I started tinkering and sharing my progress online. Within weeks people around the world were asking to join in my projects: So… I set up the Craftivist Collective in January 2009.

Since then, I’ve been honing my craft in craftivism not to replace other forms of activism but to add to the activism toolkit, and be used in the right context. I’ve delivered workshops, consulted for and collaborated with the charity sector, arts sector and beyond and created kits, books and tools for anyone to use wherever they are in the world.

I’ve weaved neuroscience and positive psychology into my projects and I call my approach to craftivism ‘Gentle Protest’. I’ve created a 10-point manifesto that has been translated into many languages by craftivists around the world and the World Wildlife Fund even used my manifesto to help change the law in Spain, to protect migrating birds! Our craftivism projects have helped change hearts, minds, policies and laws… How?

Well, first of all, gentle craftivism can help create a safe space for deeper engagement with social change: to reflect on the causes and complexities, what we can do to be part of the solution not the problem and help us channel our anger, sadness or despair into strategic, kind and effective activism.

My craftivism events include calming smells, instrumental music, tablecloths with hopeful colours like yellow and turquoise, we have flowers on each table, grapes to share. And I create questions for each project that attendees reflect on whilst crafting. Our events are popular with activists, craft-lovers as well as with people who are nervous of more extrovert forms of activism or who haven’t felt welcome in other activist groups. It’s a space for contemplation, conversations and connection with a diverse group.

Another way craft can be useful is to help activists become critical friends rather than aggressive enemies.

If we feel attacked or judged, our instinct for survival takes over: we get defensive, we listen less and can become even more stuck in our ways. So, when it comes to protesting, we need to be careful about how we interact with power-holders if we want them to engage with our concerns and to be part of creating the solution.

That’s why one of our strategies is to hand-craft small, bespoke gifts for decision-makers. Genuine, respectful gifts. For example the Head of a campaign organisation came to tell me that for 3 years they had tried, unsuccessfully to gain a meeting with the CEO of a major retail company, to discuss becoming a Living Wage employer, and did I have any new campaign tactics they could try. I thought hmmm: “Who does the CEO of the business have to listen to?” The Answer?: his 13 other board members.

So I recruited 14 craftivists who fitted the core-customer demographic of the business and delegated them a board member each. I asked them to research their board member’s personality, passions and even what colours they wear the most. And then, find an encouraging quote about being a positive changemaker, from someone the board member would admire and stitch it on a handkerchief that I had bought from the company encouraging them not to ‘blow it’ but to use their power to create a positive difference through their role. We then hand-wrote letters to go with the gift to say how we loved the company’s products and that we were saddened to hear that they don’t pay the Living Wage, because that would help their staff not to struggle financially or have to get second jobs, but also it makes business sense to be a Living Wage Employer.

We bought shares and went to the AGM as shareholders. We wrapped up our hankies and letters in boxes with ribbon, to hand over one-to-one with a smile and humility.  Within the next few months we had a few meetings and respectful correspondence, and before the following AGM the Chair of the Board announced a pay increase for 50,000 staff in line with the real Living Wage. We went to that AGM, this time to thank them and encourage them to become accredited Living Wage Employers.

In the break, many of the board members searched for their craftivist to thank them personally for their gift. One hanky was donated to the company’s permanent archive to represent a part of the change in the company’s history! One board member told us that they had to explain to their children what the living wage was after they had seen the hanky. The Chair of the Board told me quietly that it was the most powerful campaign they had ever experienced because it was so unusual, so respectful and we had a robust argument they couldn’t dismiss.

Neuroscientists call this a ‘good surprise’. A lot of activism is often a ‘bad surprise’ – getting a milkshake thrown at you or a loud demonstration pop up outside your office. These often cause ‘fight or flight’ responses. Good surprises create dopamine, the feel-good neurotransmitter, in the brain of the decision-maker, which means they are more likely to engage with the activist in the moment and in the future.

Another way craftivism can be used is as a gentle nudge. Personal changes are most often a culmination of small things, such as seeing people doing something regularly or hearing the same message in different environments.

What we call our Mini Fashion Statements are gentle thought-provokers. These  are small, handwritten paper scrolls which we drop into the pockets of clothes hanging up in fast-fashion stores, to encourage shoppers to be curious about the story behind the item and offering ways they can be part of helping to make the fashion industry’s practices as beautiful as the clothes themselves. It’s an act of shop-dropping! – the opposite of shoplifting. The paper is high quality, with an embossed scissor image on it, the message is written by the craftivist anonymously in their neatest, prettiest handwriting, ideally with a fountain pen (!) and, signed at the end with @FashRev to find out more. The scroll is tied up with purple, turquoise or mauve ribbon and the message on the outside says in lower case “please open me” with a smiley face and a kiss! The project has been covered around the world by popular news outlets, across social media and fashion journalists have thanked me directly for offering them an attractive way of covering the issue of unethical fashion in a positive way without losing advertisers or readers.

There are many other ways craftivism can be used effectively as a tool to help move the needle on social justice. And like all tools, craftivism can be used well or… badly. A craftivism object could be made without thought, could be used to spread a hateful message… but I believe gentleness is the golden thread that creates real positive change. Gentleness is far from being passive or weak. It involves self-control, courage and compassion.

Activism will always matter. So… the next time you see an injustice, I encourage you to open up your activism toolkit, and remember that, in there, is a tool called Craftivism that can help transform our world in a powerful and gentle way.