Home / Worth writing about… / All / My Craftivism*: by craftivist Helen Le Caplain (aka Mancunian Vintage )

My Craftivism*: by craftivist Helen Le Caplain (aka Mancunian Vintage ) 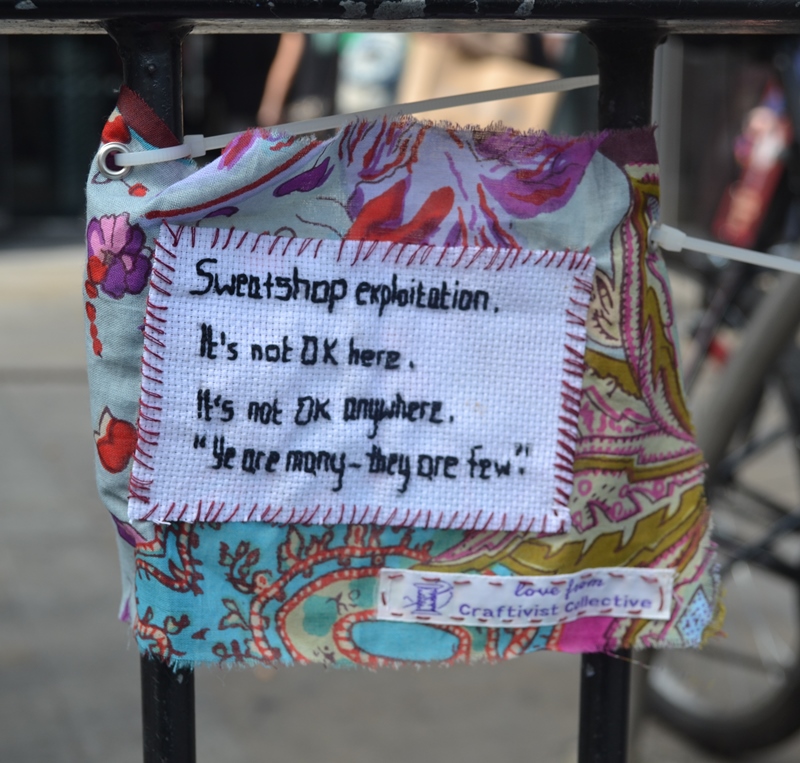 Posted at 00:03h in All, My Craftivism by Craftivist Collective 0 Comments
1 Like

“My Craftivism” is a series: We’re always excited to hear about & spotlight craftivism projects that fellow craftivistas are involved in. In this series we hope to offer a platform to craftivists to show and speak about their latest craftivism activities. If you would like to share your own craftivism piece or event with us please do email us at Craftivist.Collective@gmail.com for more info 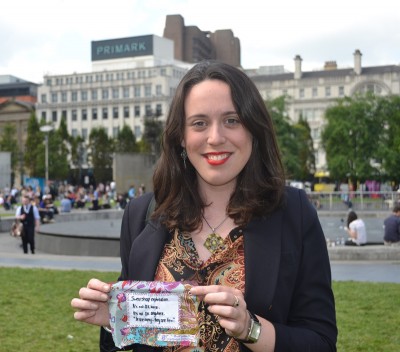 Craft of choice: Knitting, but a keen amateur sewer too

How did you get into craftivism? After seeing the hugely successful #imapiece Jigsaw Project unveiled in Manchester earlier this year and hearing Craftivist Collective’s Sarah Corbett talking about the installation so passionately was what got me really interested in the idea of using craft as a social campaign tool.

My love for vintage fashion was born out of the fact that I loved unearthing second hand gems, the incredible fit of clothes from bygone eras, and a growing unease about where our high street fast fashion clothes come from.

I truly believe that no amount of beauty contained within a garment can justify its ugly origins when its highly-skilled creators have to work 16 hours a day in appalling conditions for little pay to churn them out. When I heard about the latest Love Fashion Hate Sweatshops campaign in conjunction with War on Want I knew this was something I wanted to get involved in. 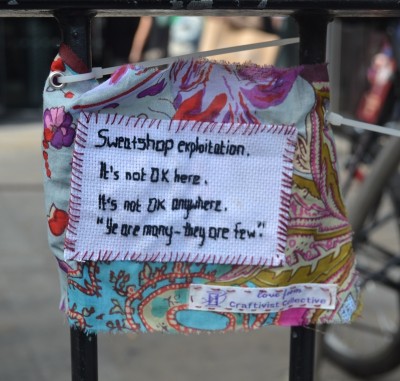 banner in situ in Manchester Piccadilly

Tell us about your craftivism project / event – what did you do, and how, and why?  I’ve been beavering away on a mini protest banner for the sweatshop campaign on and off for the last few weeks now. Around the same time as the kit landed on my door mat the world-famous Manchester International Festival was in the city and political poem The Masque of Anarchy was performed by Maxine Peake.

There were a couple of lines which really captured my attention:

“Rise like Lions after slumber
In unvanquishable number,
Shake your chains to earth like dew
Which in sleep had fallen on you-
Ye are many – they are few.”

Though written about Manchester’s Peterloo Massacre in 1819 I believe it still has resonance today.

I loved the imagery it conjured up of urging those people sleepwalking their way down the high street and not thinking about where the clothing comes from to wake up and take a stand. Hopefully my little banner will wake some people up to what’s still taking place in sweatshops across the globe and inspire them to act themselves.

What response have you got / do you hope to get from your craftivism? The response on social media sites has been really positive and when I’ve discussed the project with family and friends they’ve been really interested – firstly in what I’m making and then the reasons behind it. I hope to get the same sort of response when people see it tied to the railings outside Primark!

What were you thinking about while you were stitching?

Initially I was thinking ‘crikey this lettering looks wobbly, what on earth will people think?’ but after a couple of letters I realised it’s not just about the professional finish of the banner. The fact that you’ve taken the time to meditate on an issue and pour your energies into creating something that will survive much longer than the echoes of a shouting protest crowd is something I hope that people take away from it. At the forefront of my mind as I stitched was the terrible Bangladesh factory accident which resulted in the deaths of more than one thousand garment workers.

I thought about the daily struggles that these people, and millions across the world, face in sweatshops, and it made me feel heartily sick that it’s all to make a quick buck on the high street. As I put the finishing touches to the banner I just hoped that people would take the time to look at the banner, get on board with the campaign and make their own stand against sweatshop factories.

How do you think that craftivism can change the world? I think that in a world full of injustices and tragedies it’s very easy for people to feel overwhelmed by the number of petitions, protests and demonstrations taking place up and down the country. Speaking from my own experiences, and talking to other people, it can be hugely frustrating and disheartened to campaign so passionately on issues and not get the outcome you want. This isn’t to say that just because you didn’t get the result you wanted that people should give up protesting but I feel that craftivism is a great way to revive any lagging drooping activist spirits and inform people of issues in a gentler and more creative way.

If I could get just one person thinking about these issues and influence them to act thanks to the mini protest banner then I’ll consider it a job well done. And I’ve had a chance to make something pretty in the process – result!

Thanks Helen for your time and thoughtful words. If you would like to write a guest post for the Craftivist Collective blog, please email us at Craftivist.collective@gmail.com

Craftivist Collective is a social enterprise that relies on your support. If you enjoyed this blog post, please comment, share or head over to our shop.