Posted at 00:41h in All by Craftivist Collective 0 Comments
1 Like 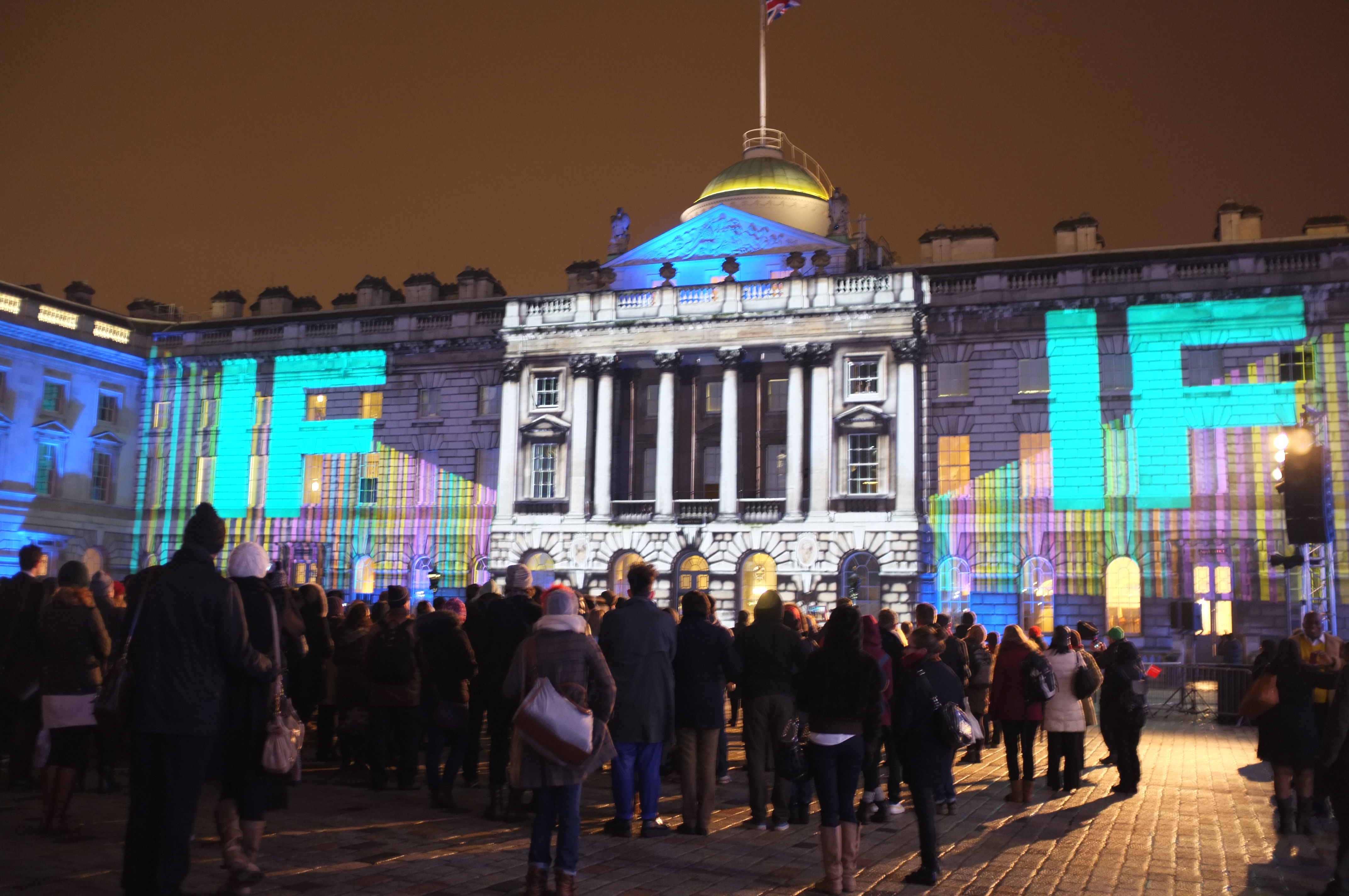 … enough of us join forces to demand change to make sure that every child lives a life free from hunger. It sounds like a pipe dream I know. I bet you’re thinking (what I thought!): “yeah right! As if little me can end hunger, that’s impossible” but for the 16 hours I’ve been awake on 23.01.13 I’ve been thinking we actually can & not once has my hope turned to doubt! Wana know why?

Well, I woke up this morning to an email from Save the Children saying that they and over 100 other aid agencies (!) have joined together to end this scandal- that the world produces enough food for everyone but hunger kills 260 children every hour. The campaign is called Enough Food If. I watched the video below in bed (yep it’s still soooo cold in London I don’t want to leave my bed in the mornings!) & it got me excited and hopeful. Then I tweeted the video, shared it on Facebook and saw that already #IF was trending & it seemed like a real buzz was around this campaign already on Instagram, Twitter & Facebook.

On the bus to a meeting I was fixed to my smart photo looking at images on Instagram of IF cakes for office breakfasts, I saw IF wristbands and Tshirts on campaigners proud to show them off & twitter was full of celebs tweeting how awesome this campaign was & could be (Stephen Fry, Alan Sugar, Bill Gates, Piers Morgan & more… go check out their tweets!:) plus reports of the IF campaign were being talked about on Day Break, Sky, written about in Daily Mail & other papers and by the afternoon 3 MPs managed to question the UK Prime Minister in Parliament on whether he supports the IF campaign.

Because our #Imapiece Craftivist Jigsaw project is part of Save the Children’s Race Against Hunger campaign which is part of the IF campaign myself and fellow Crafty Avengers Deadly Knitshade, Mr X Stitch & Haptree of CraftBlogUK where invited to join some other Save the Children supporters to attend the big London launch event of #IF at 6pm. So I headed off with Haptree (Hilary Pullen) and her beautiful children to freezing cold Somerset House for 6pm (sadly Mr X & D.Knitshade were too busy). We were really excited (& a bit geeky with our cameras wrapped around our necks!). We saw some celebs in front of the inflatable IF letters having their picture taken by the paparazzi helping get media attention for this campaign -thanks Downtown Abbey cast members and others! 🙂  I brought some craftivists jigsaw pieces & Hilary’s kids picked which ones to show off in the picture below. Do you recognise if they picked your jigsaw piece? 🙂  We really did feel part of something big. 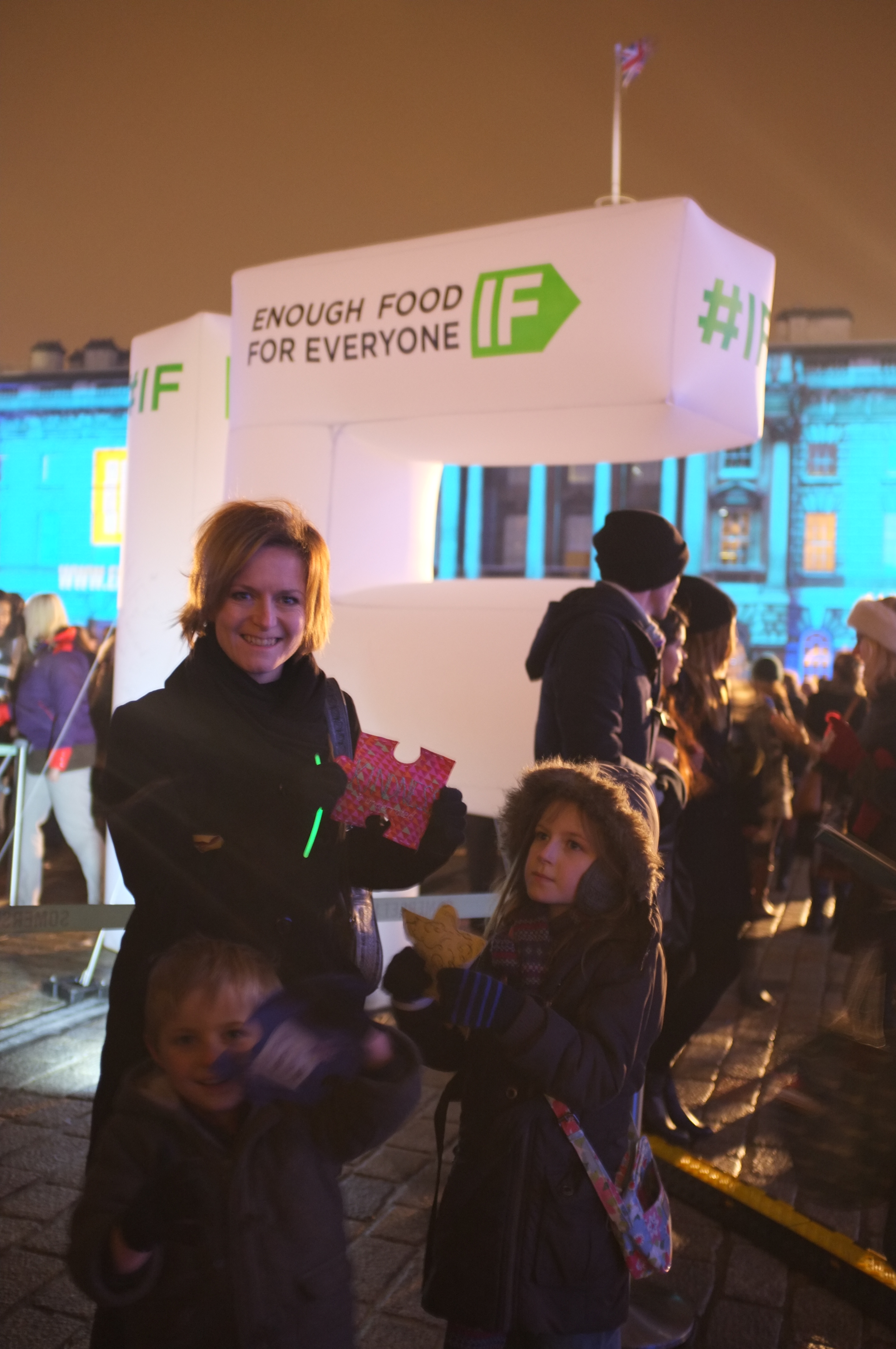 We were in a big crowd full of campaigners from different charities such as Oxfam, Tearfund, ActionAid and more. There were 30 Olympic Games Makers in their uniforms making lots of noises of support, bloggers and tubers, people of all faith groups and even the Urban Voices Collective sung from the balcony of Somerset House (you know the bunch, from the closing Olympic ceremony!). It really felt like so many communities of people where here (in the freeeeeezzzzing cold!) demanding a better world for everyone that maybe we could make a big enough noise for our Prime Minister and other world leaders to break down the structures keeping people hungry & put in policy that helps create a world which has enough food for everyone. How could they ignore our demands if the whole of the UK and other countries demanded it?!

Lauren Laverne was a brilliant host. Her and other speakers like Bill Nighy spoke passionately about how 2013 is our opportunity to make history- the G8 are coming to the UK, our Prime Minister Cameron has the G8 Presidency for the whole of 2013 so let’s show how much we care for our global neighbours & won’t stand for injustice. We were reminded that yep we showed the world at the Olympics that we were behind that event 110% & even got Cameron to set up a Hunger Summit as part of the games, so surely we can totally do the same with the #IF Campaign right?!:)

There was a 4D projection of an animation of the IF Campaign plus messages of support from highly regarded people from around the world including Bill Gates & of course One Direction! ;p It was pretty darn cool seeing the projections & animations it definitely made me think If we can do awesome techy stuff like this then of course we can eradicate hunger- we don’t need new technology, we just need to put people & the planet before profit and power!

We know hunger is a complex issue and doesn’t have one single solution. That’s why we the Craftivist Collective are encouraging craft lovers like yourself to make jigsaw pieces for our #imapiece project supporting Save the Children’s Race Against Hunger campaign. These jigsaws remind us and others that there are lots of problems causing hunger not just one but there are also tangible solutions which will make 2013 a year in history where we can say finally no one goes to bed hungry on our planet – we won’t let it (how cool would that be right!?)!

WE CAN END HUNGER IF… 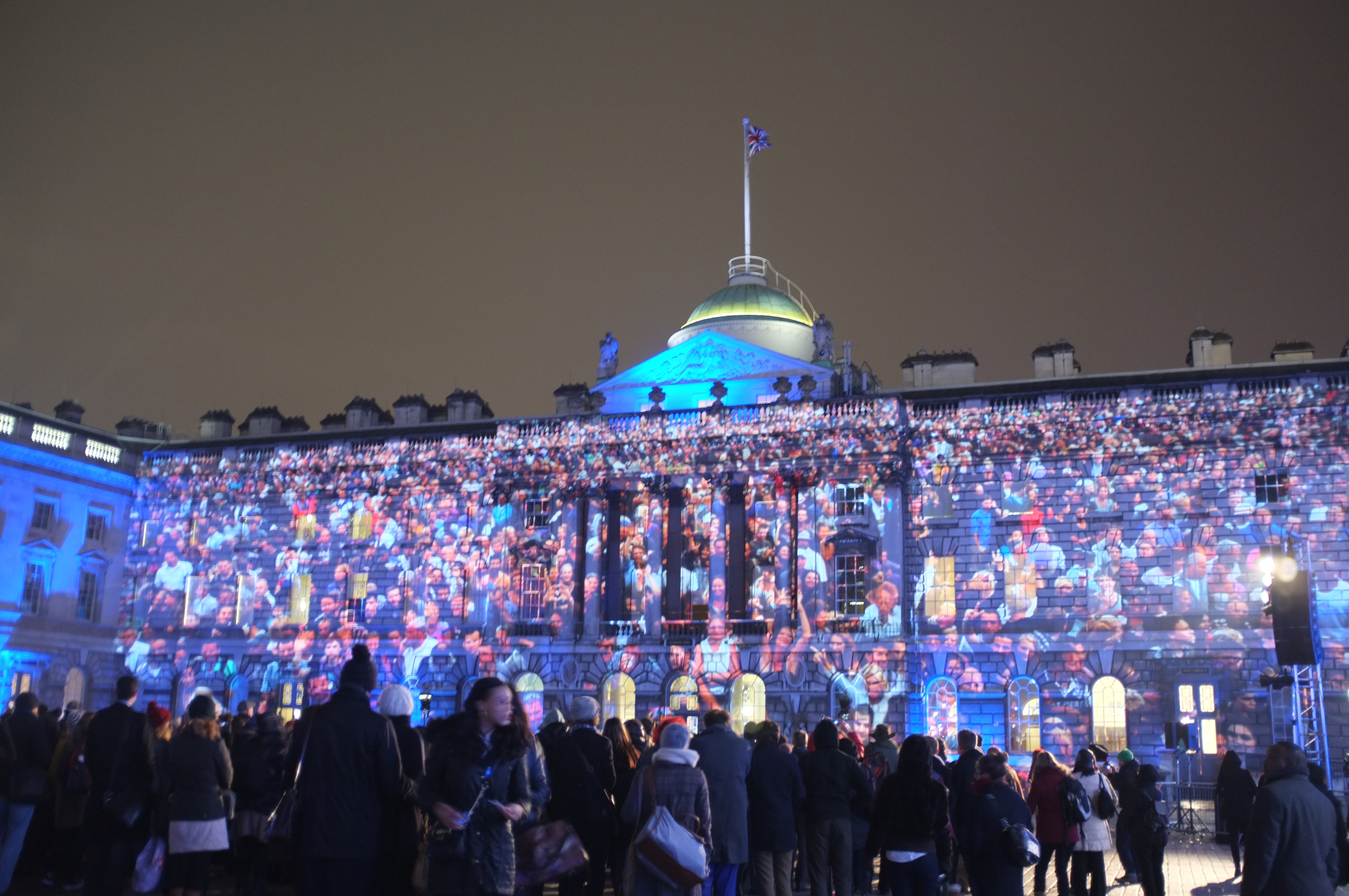 …this year the leaders of the world’s richest countries tackle four IFs:

#IF we work together we can make 2013 the beginning of the end for the global hunger crisis. But only #IF we unite 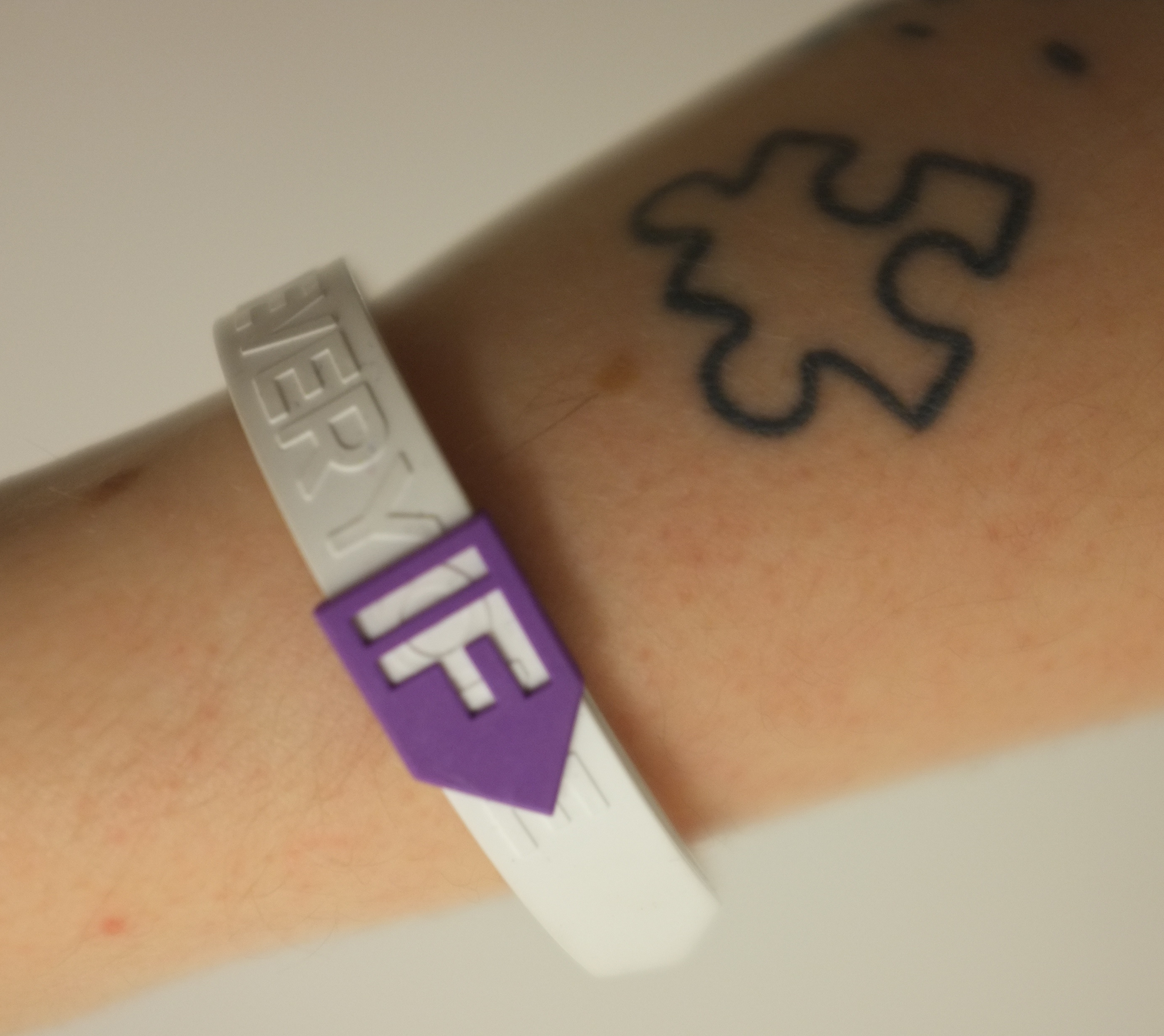 So join me, Hilary and thousands of people who have already joined the Enough Food IF campaign  by signing up to the IF campaign, signing the Save the Children Race Against Hunger petition (here & takes 2 mins!) & by joining fellow members of the craft community by adding your voice in the way we are good at & touches people deeply- craftivism! If you haven’t already, please make a jigsaw piece for our #impiece installation (deadline 21st Feb!), make a jigsaw piece for your MP (deadline 1st March!) & a jigsaw for yourself to remember to be part of fulfilling our worlds potential to be awesome (deadline = up to you!). All the support you need is at imapiece.craftivist-collective.com & craftivistDOTcollectiveATgmailDOTcom 🙂

KEEP hoping for a world where everyone can fulfil their potential, KEEP fighting for no one to go to bed hungry at night & KEEP demanding that children get the nutrients they need to grow strong and health because IF we all do then just imagine what an awesome world we can create together. #imapiece of this vision, are you?