Home / Worth writing about… / All / We can finally show&tell you about our #secretcraftivism project!:)

We can finally show&tell you about our #secretcraftivism project!:)

05 Dec We can finally show&tell you about our #secretcraftivism project!:)

Posted at 00:28h in All, Projects by Craftivist Collective 2 Comments
1 Like 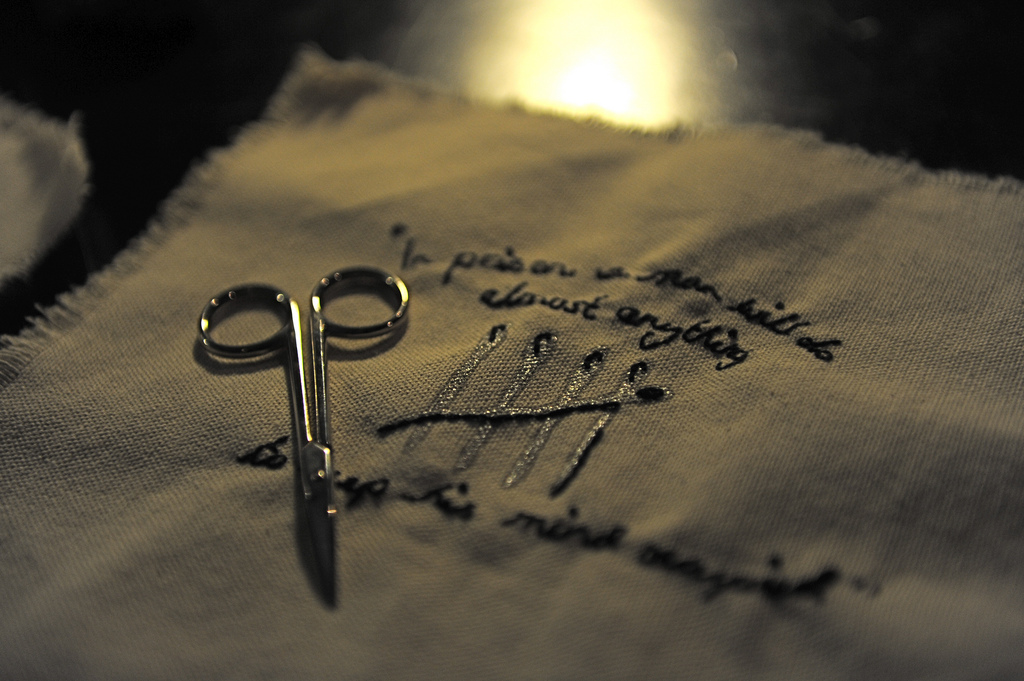 So since 2nd November we’ve been tweeting, instagramming & facebooking hints at a big project 8 of us Craftivists have been working on for the last 5 weeks. We had to sign a contract with Secret Cinema not to tell anyone until today. It’s been a pretty big chunk of our life the last few weeks so although we are focusing on the #imapiece Craftivist Jigsaw project still, we really wanted to share with you what some of us have been up to: 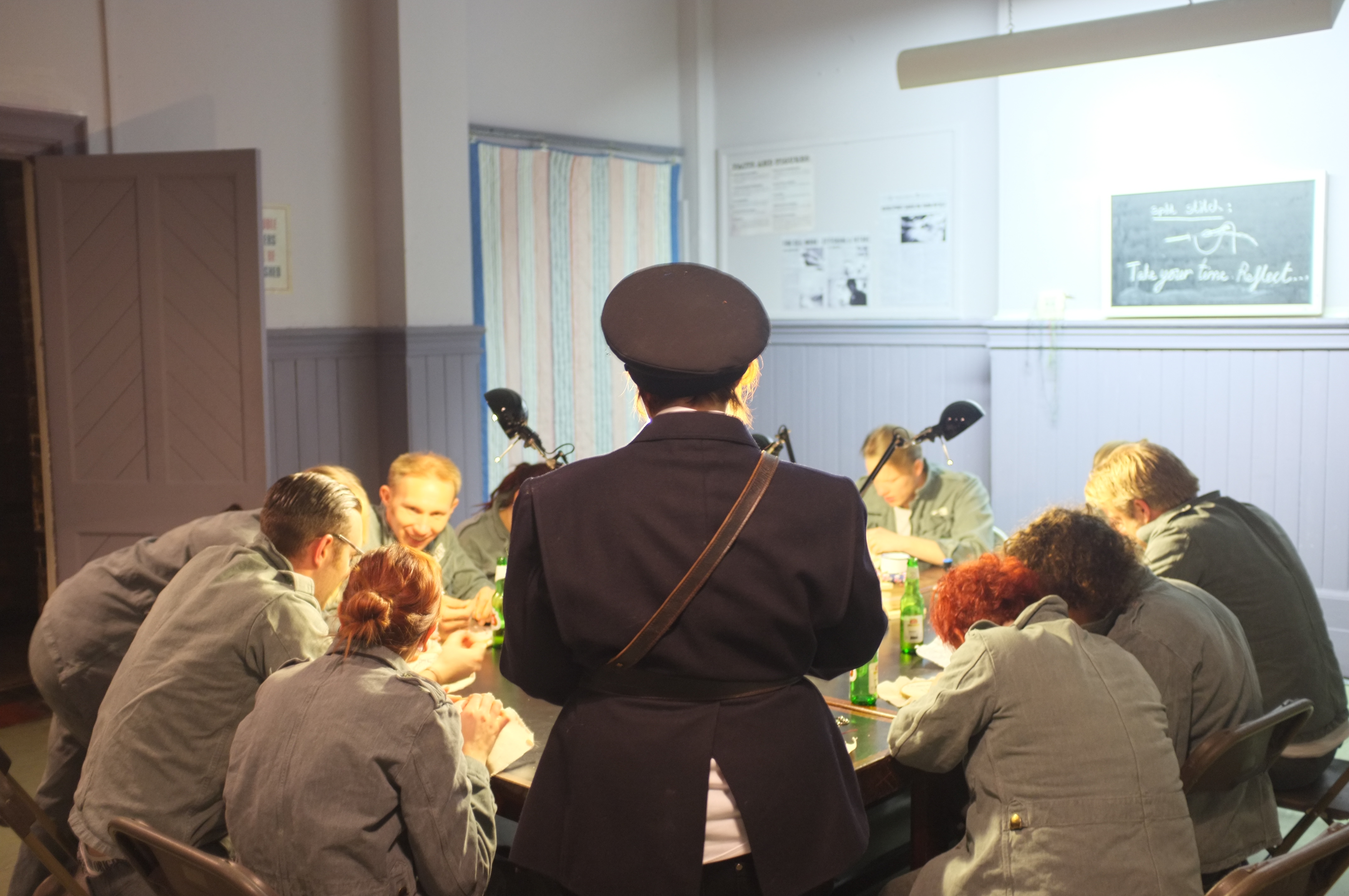 From 2nd Nov- 2nd December 2012 the incredibly talented team at Secret Cinema asked us to be part of their biggest project to date- creating an immersive, theatrical cinema experience linked to the film Shawshank Redemption in East London in an old catholic primary school. If you don’t know what Secret Cinema is Google it and be amazed! They turned the school into a prison (very convincing I promise) with 500+ ‘prisoners’ taken to prison at each show directly from their court hearing. The inmates were intimidated by Guards (scary actors) & Warden Norton and told tips by over 30 actor prisoners on where to find the alcohol (in the library), how to keep out of trouble, where to gamble on a fight etc. ‘New Fish’ inmates then headed to different ‘work details’  including candlemaking, card making, writing letters & sports in the yard. There was also a priest in the chapel, a psychiatrist, an infirmary, artwork in offices and cells and key characters and scenes from Shawshank Redemption film being acted out. All this before the screening began. Most people still hadn’t guessed the film before it popped up on screen. 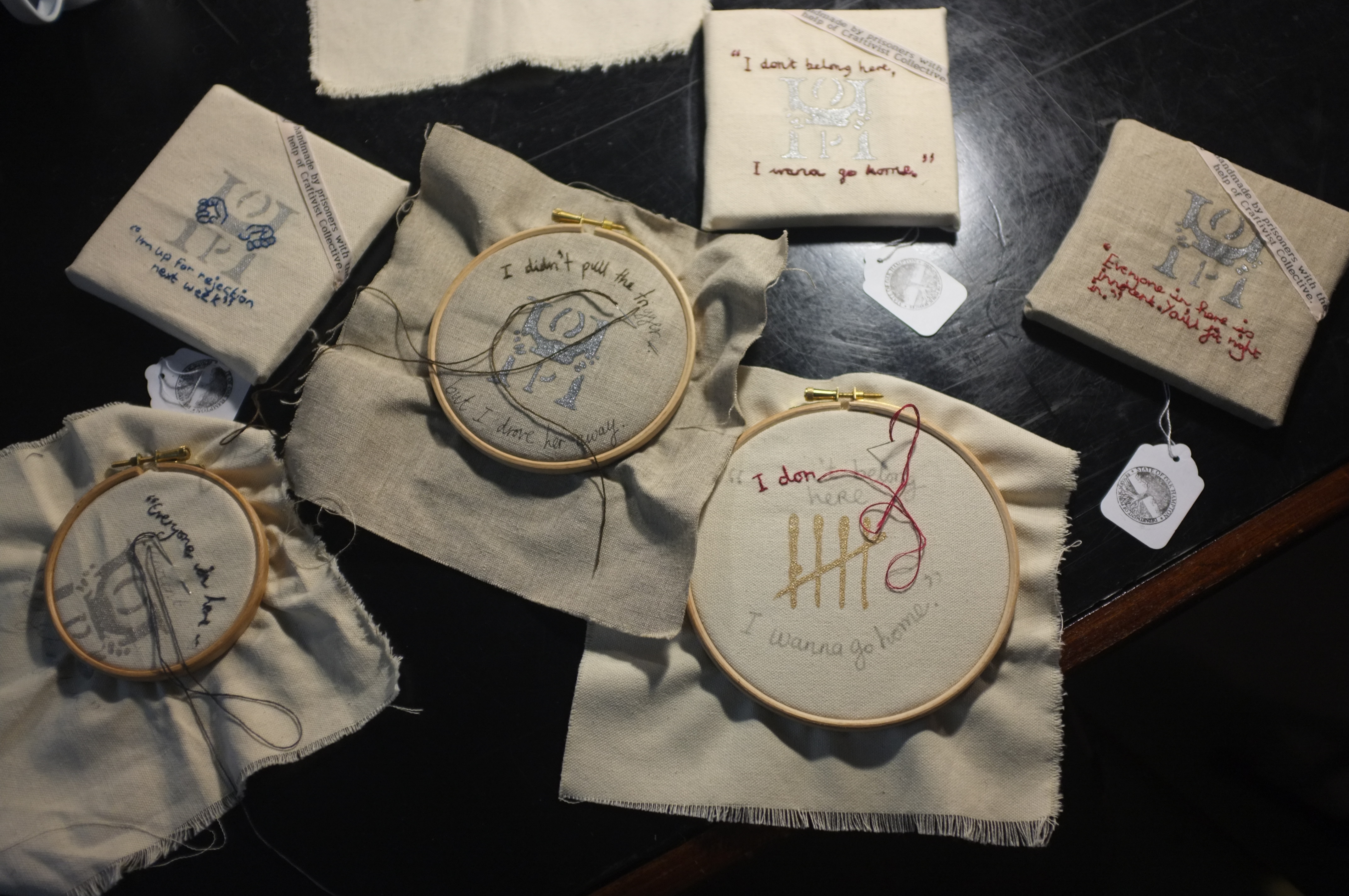 So what where we doing there?! Something completely different to what we are used to, that’s what: I guess you could call it ‘performance craftivism’ (or does that sound really pretentious?:s )

We delivered 22 work details (workshop) over the month engaging over 3000 people directly in craftivism and over 16,500 indirectly through prisoner testimonies on the walls and 3 craftivism artwork commissions (me, Sarah C did) throughout the ‘prison’, as well as being represented in the ‘Probation book”. 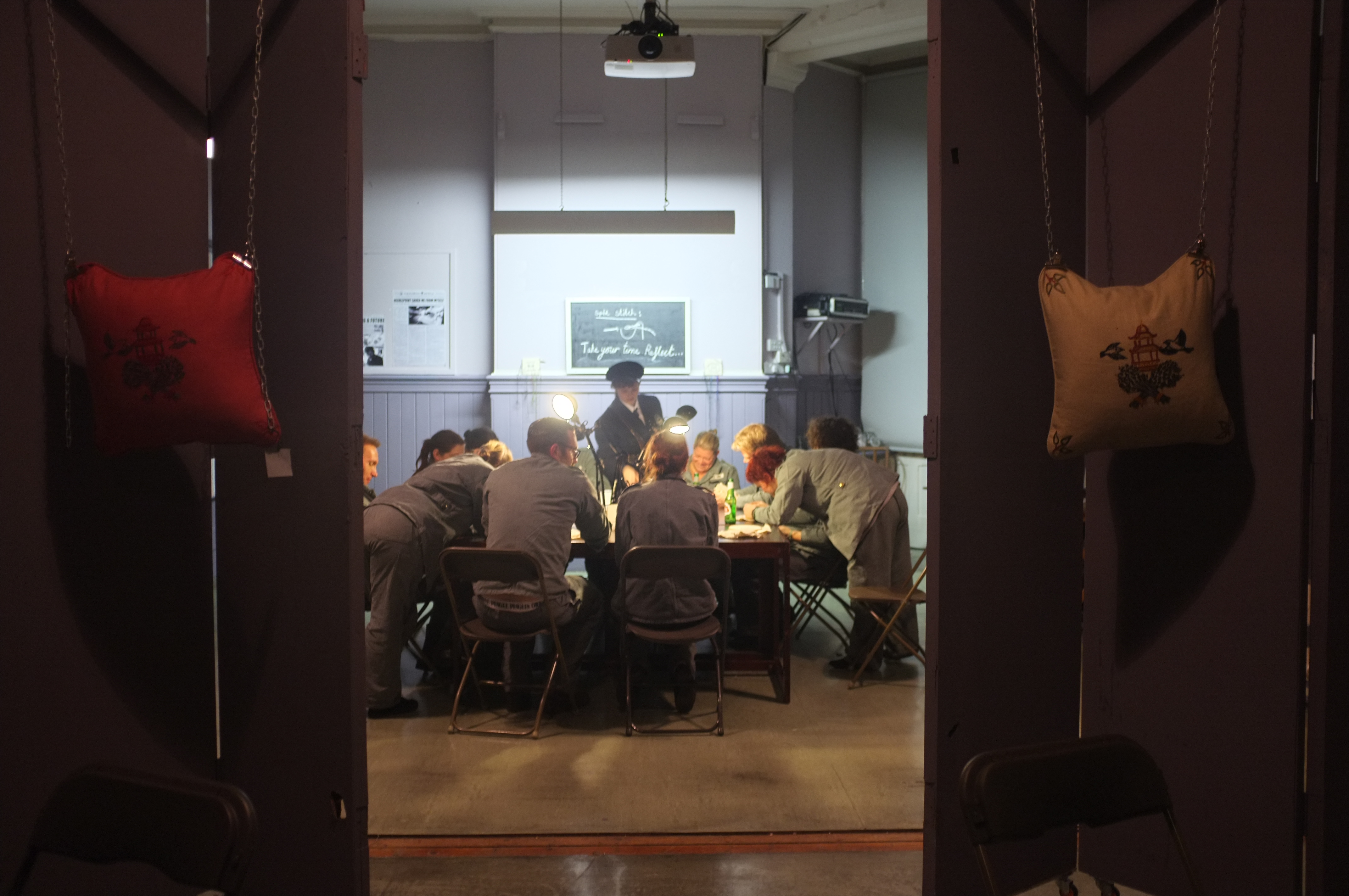 We created a needlework workshop for prisoners to drop in to. We (our craftivist Guard) explained that needlework is good for prisoners mental health, anger management, reflection and other forms of personal development and our Prisoner craftivist helped faciliate whilst explaining how craft had helped them in their rehabilitation.

The prisoners/customers job was to help stitch small canvases with quotes from real prisoners who had benefited from working with Fine Cell Work charity as well as quotes from fictitious prisoners from the film Shawshank Redemption. The pieces, alongside the artwork , are being sold soon through Secret Gallery to raise money for Fine Cell Work to be able to work with more prisoners in the UK as well as provoke the makers and viewers to think about the justice system. 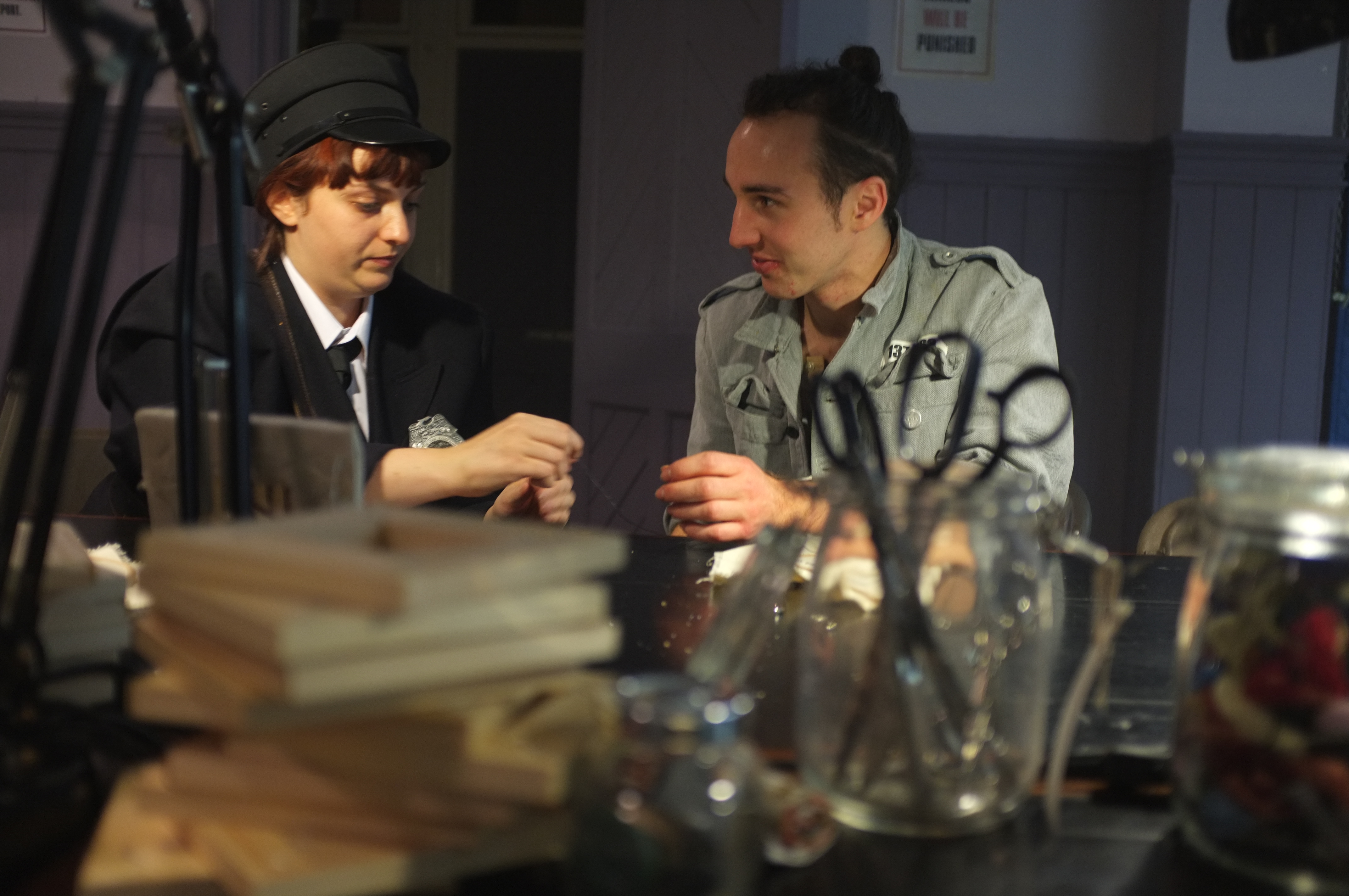 Feedback has been positive. Some people got really into it and into character. Some people said they could really understand that craft can help with mental health, feeling valued and focused and some of the actors even incorporated our workshop into their character’s storyline.

We have been asked back in January by Future Cinemas to continue what we did but sadly we have other commitments like #imapiece project & our book. 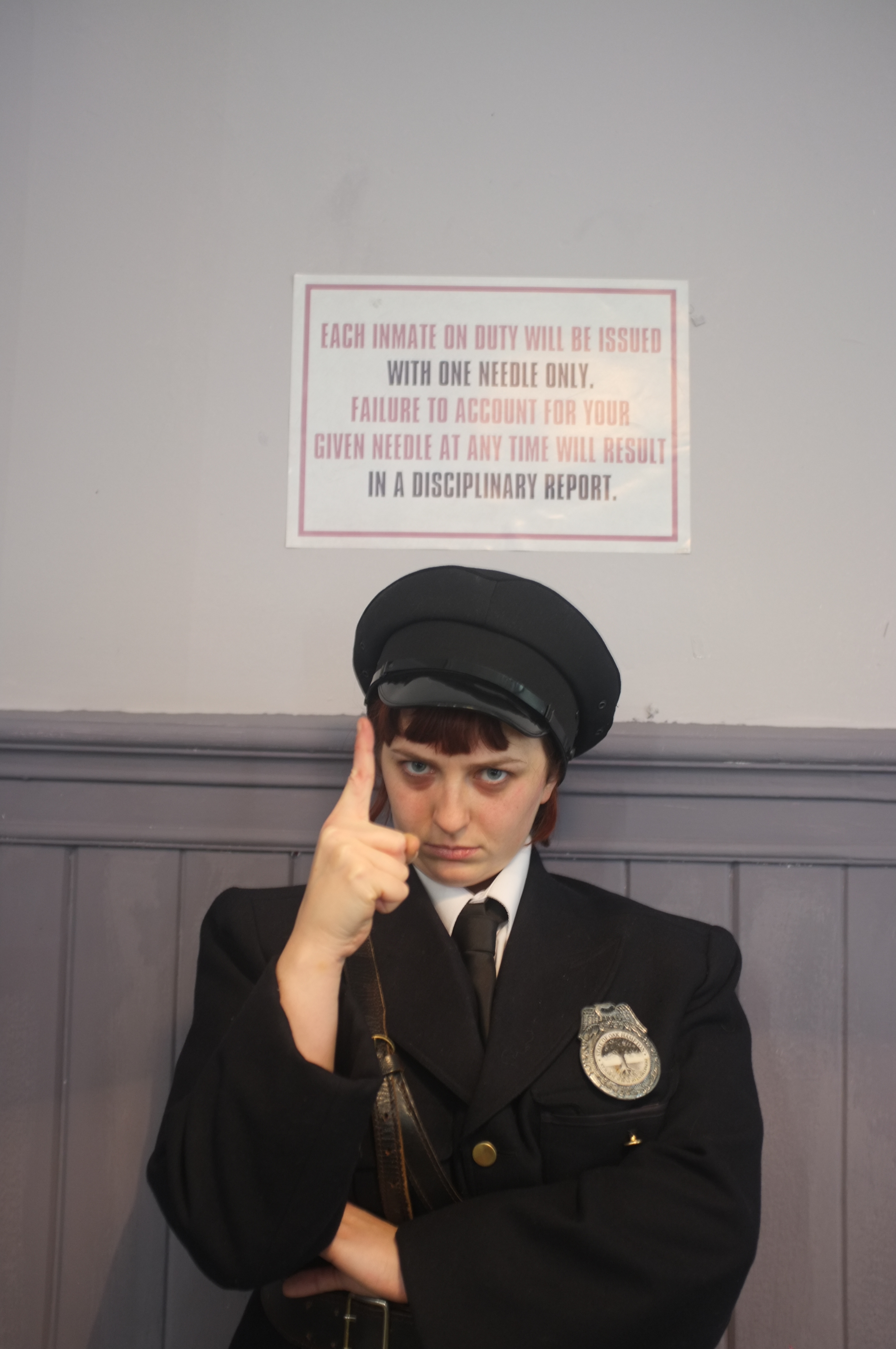 This project was completely out of our comfort zone (acting, in costume, being super strict with people and drop in sessions) but it was a great challenge and another way craftivism can be delivered. What an experience!