Home / Worth writing about… / All / Craftivism and the City: “The Barbie Effect”

Craftivism and the City: “The Barbie Effect”

17 Nov Craftivism and the City: “The Barbie Effect”

Posted at 11:08h in All by Craftivist Collective 2 Comments
1 Like

Recently we were contacted by the lovely Emilie, studying at The New School for International Affairs and Media all the way in the USA.  She had come across the Collective’s Barbie Project from a while back, which aimed to bring a dialogue on domestic violence out into the open in a thought provoking way.  Emilie put her own twist on the project for her studies and here are the results: 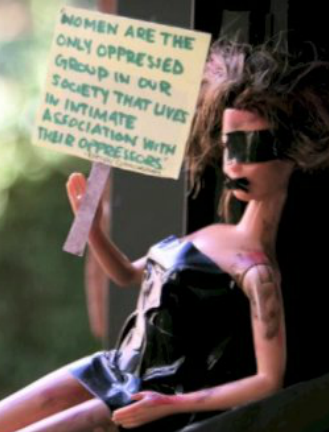 Equipped with the task to create a participatory media project for class, I was inspired by Craftivist-Collective’s Barbie idea to advocate for women’s rights. I set up three Barbie’s each with different messages. In honor of UNICEF’s recent International Day of the Girl Child, I devoted one ‘Skipper’ doll to advocate against child marriage. Another doll discussed US Presidential candidate Mitt Romney’s decisions to end many life saving health care services for women. By taping the Barbie’s mouth shut, it symbolizes how many US women feel about having their health rights taken away, silenced and abused. The other Barbie had a quote about female oppression, representing violence against women.

The way people interpret violence against women in the media differs all over the world. However more often than not, women are labelled as victims of violence or sexually passive beings, incapable of their own safety, in desperate need of male protection. Domestic violence is often mistaken as being a lover’s quarrel, or a man’s way of expressing canadian online pharmacy overnight shipping love or passion.  Emotional abuse then is understood to be less serious than physical abuse.  Violence against women becomes a way for men to discipline unruly women, and rape is defined as a crime of lust over which men have no control. Female attractiveness increases the potential for rape and those who rape are psychopaths and strangers, not close acquaintances. Culture and traditions of violence are comprehended as something that cannot be changed by modern foreign values. Stimulants like stress, sexual abuse, fame or power often reduce the responsibility for violence against women—insert Chris Brown. However violence against women is also a human rights violation, and women who have undergone such abuse are courageous and entitled to dignity.

I decided to make this activity more about process than product; therefore my camera was used more as a decoy to draw people in to engage in the messages being seen. After people had witnessed the “Barbie Effect,” I pretended to do camera interviews, which got people engaged in conversations about female advocacy. In the end, Craftivist Collective inspired me to do more, and it really showed me how easy and fun advocacy can be.

Please watch my video, “The Barbie Effect” and share it and inspire others to become craftivists!

Emilie Romero currently works at UNICEF, for the Gender and Rights Division and is a M.A. Candidate at The New School for International Affairs and Media. She also contributes to the blog ProgressivePupil