Posted at 22:33h in All by Craftivist Collective 2 Comments
1 Like 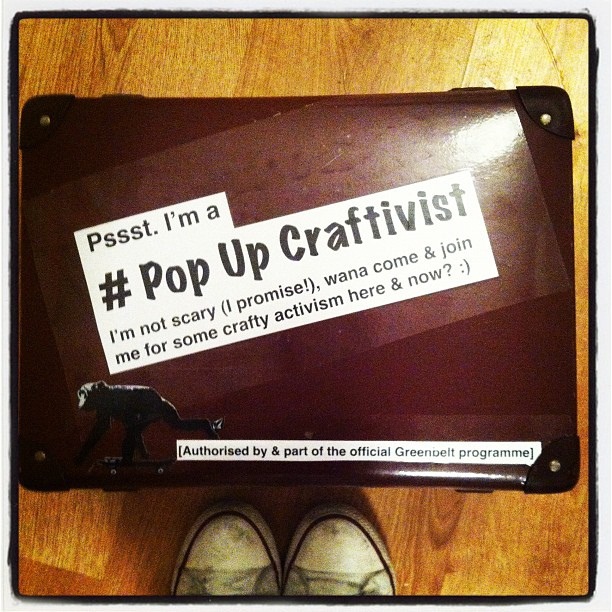 So you might have seen on  our blog and via Twitter and Instagram that I’ve been at  Greenbelt Festival for the August Bank Holiday weekend delivering workshops, a filmed talk (eek!) and being a #PopUpCraftivist (they sold some of our products in their shop too).For those that don’t know what Greenbelt Festival is, it’s an annual summer festival that focuses on arts and social justice. Puuuurfect for us obvs! So I got really excited when the Greenbelt Youth Participation Coordinator (Becky) got in touch and asked if I would come and deliver some Craftivism workshops throughout the weekend.  From Friday night to Monday evening I delivered 4 workshops and in between them was a “Pop Up Craftivist”, an idea I’ve had for a few months now and really wanted to test out somewhere.

What’s a pop up craftivist?

Sounds a bit odd … but I popped up around site with my little suitcase of craftivism hanging out at different spots of the festival throughout the weekend and tweeted and Instagrammed (is that a word?!) where I was (@craftivists  #PopUpCraftivist #GB12) so people could find me. It went pretty well and we had some great chats with new craftivism converts- many of them coming to my workshops during the festival after getting the craftivism bug 🙂 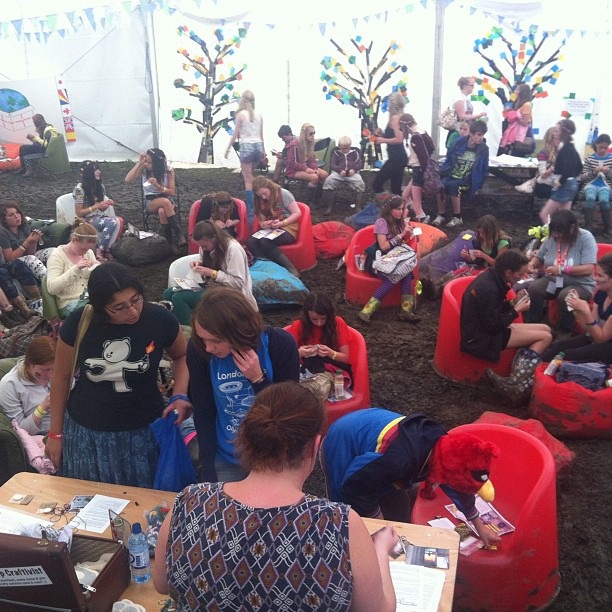 If you were there, I want to say a huge thanks to you for coming to our workshops, meeting me and my little suitcase around the site.  It was the first time I have delivered craftivism activities at a festival but the feedback was really encouraging and kind. I got pretty teary during one workshop specifically programmed in for young people to go to. I arrived to see over 40 young people (aged approx 7-16) queuing up to attend.  I had enough Mini Protest Banner kits for 30 people but luckily had my #popupcraftivist footprints activity others could do too.

On the last evening I delivered a 10 minute talk,for GTV which will then go out on Greenbelt website sometime in 2012/2013 to engage festival goers and other viewers throughout the year.  It was a great opportunity to talk about the benefits of craftivism to a wider audience at the festival but also spread the message wider through the film.  The Salon London talk the week before was a good practice for this- JP Flintoff, craftivist Nikki and craft friend Deadly Knitshade gave me great constructive feedback to help with the GTV talk and the wonderful Ben Hammersely helped me structure and practice the talk beforehand.

When we get a copy of the film we will share it with you. GTV & Salon London talks in the space of two weeks was very nervewracking but I got through it and hopefully got across how valuable I think craftivism is to have in this world.