Posted at 09:57h in All, Event, Stitch-in by Craftivist Collective 2 Comments
1 Like 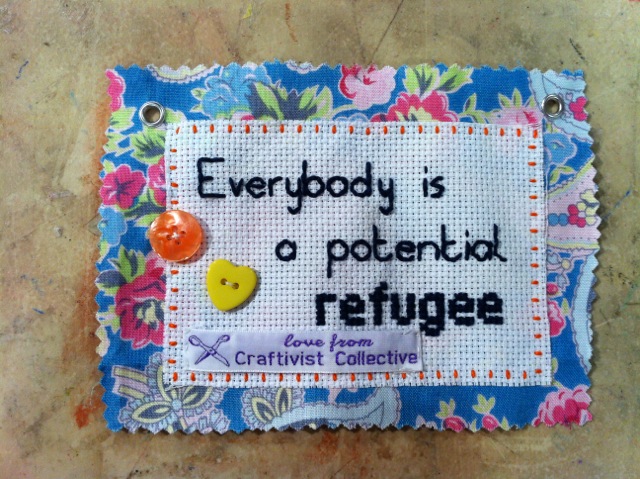 To mark the beginning of Refugee Week, the Craftivist Collective held a workshop in the Refugee House in St Fagans Museum, Cardiff. The Refugee House was an exhibition created by Refugees and Asylum Seekers from Cardiff and Newport. It recreated the typical conditions that they were forced to live in on their arrival in the UK and told the story of their journey, applying for asylum and their life in this country. It was here that Sarah Corbett, Craftivist Collective founder, introduced me to the world of Craftivism.

As someone with a strong social conscience, who always has a sewing project on the go, Craftivism was always going to be something I’d like. But it was some of the things I learned during Sarah’s introductory talk that really made me want to stay involved. In particular, I was really drawn to how it is a completely non-aggressive form of activism, encouraging people to ask questions rather than telling them what to do. Though I may not be the type of person who feels comfortable being angry and forceful, I am more than happy to explain to someone on the train platform why I have spent my time embroidering a message about Refugees onto a mini banner – after all, they asked! I also really liked the fact that the messages we were trying to get out were very positive and I left feeling hopeful rather than hopeless!

I found the process of making my protest banner really relaxing and others agreed that it was a good way to build in time to reflect on the issues we were stitching about. Finishing my cross-stitch felt like an achievement for the day and seeing something tangible made me think I had done something that might make a difference, albeit a very small one. 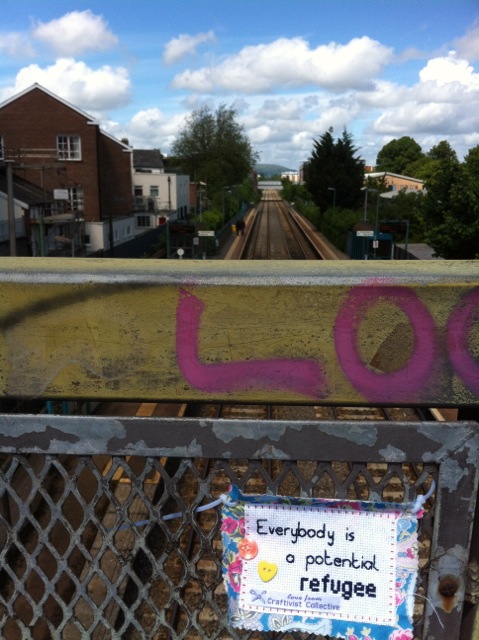 Though I was only planning to go to the morning session, I ended up staying all day. This was partly because I needed to finish my mini protest banner and partly because it was so nice to sit and chat with lovely people. I learnt a lot about the Refugee and Asylum Seeker community in South Wales and the UK, thanks to Reynette from Oasis Cardiff, and I think everyone at the workshop felt the same as me – that it was a sociable and positive way to try and get your message heard. I am definitely a converted Craftivist and I got a real buzz when I put up my first protest banner! I walk past it on my way to work and it is great to see people stopping to take a closer look.

The workshop also made me realise that I have been following the Collective from afar for the past year and doing very little about it.  Unable to attend meetings in London I hadn’t got involved at all when there were plenty of like-minded people from Cardiff at the workshop who had probably been doing the same. The Craftivist Collective website is full of resources and kits to get you started so you can be a Craftivist anywhere in the world, whether it be on your own or with a group of friends. With that in mind I am organising a jam jar lid workshop in Cardiff at the end of August, so why not do the same, wherever you are!