Home / Worth writing about… / All / First attempt at cross-stitch graffiti

Posted at 15:03h in All by Craftivist Collective 0 Comments
0 Likes 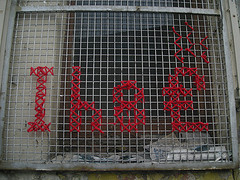 Sarah Corbett writes:First of all, bear in mind that this is my first ever cross stitch graffiti piece so I went for something quick and easy. It’s supposed to say ‘I hate dirty money’ hence the smelly squiggly lines above the pound sign.

I did this about 3 months ago. Its done with thick wool and you can find it at the top of Brick Lane on Bethnal Green road, London, England.

I got into cross stitching in August 2008. Then I suddenly noticed fencing that reminded me of fabric aide and I thought, why not wrap wool around the fencing squares and create a cross stitch effect. It wasn’t until about a month later that people started contacting me on my old blog ‘A Lonely Craftivist’ that i realised that other people were doing similar stuff all over the world. The power of the internet is always reminding me that someone has already come up with an idea way before me *sniff sniff*. Check it out. It’s so cool! 🙂

I did it at 5am on a weekday thinking Brick Lane would be dead but it was so bright that day, loads of cars went past and i got a few heckles from random old guys saying “thats illegal you know”. I agree; it is but its not permanent- you can cut it off with scissors really easily. I also got two lovely guys come up to see what i was doing. They were street cleaners and said that they hate having to clean off graffiti and stickers but they liked what i was doing so they promised not to take it off. And guess what?: its still there (yay!) and the weather has actually made it stronger and stiffer which is a relief because i thought the knots would get loose easily because the wool is so soft.

I hope it makes people think about how we spend our money, where our money goes and what it is supporting. Even if it doesnt make anyone else thing, every time i walk past it, it keeps me in check and reminds me to try and live ethically.

I have done some others you can check out here in Liverpool and London. I hope to find time to do a lot more and have already eyed up where I want them. Plus, the lovely staff at Spitalfield’s City Farm have offered their fences to be wrapped in wool so hopefully the Craftivist Collective will have time to do some cross stitch graffiti on the theme of the environment and animal rights there. Watch this space 🙂