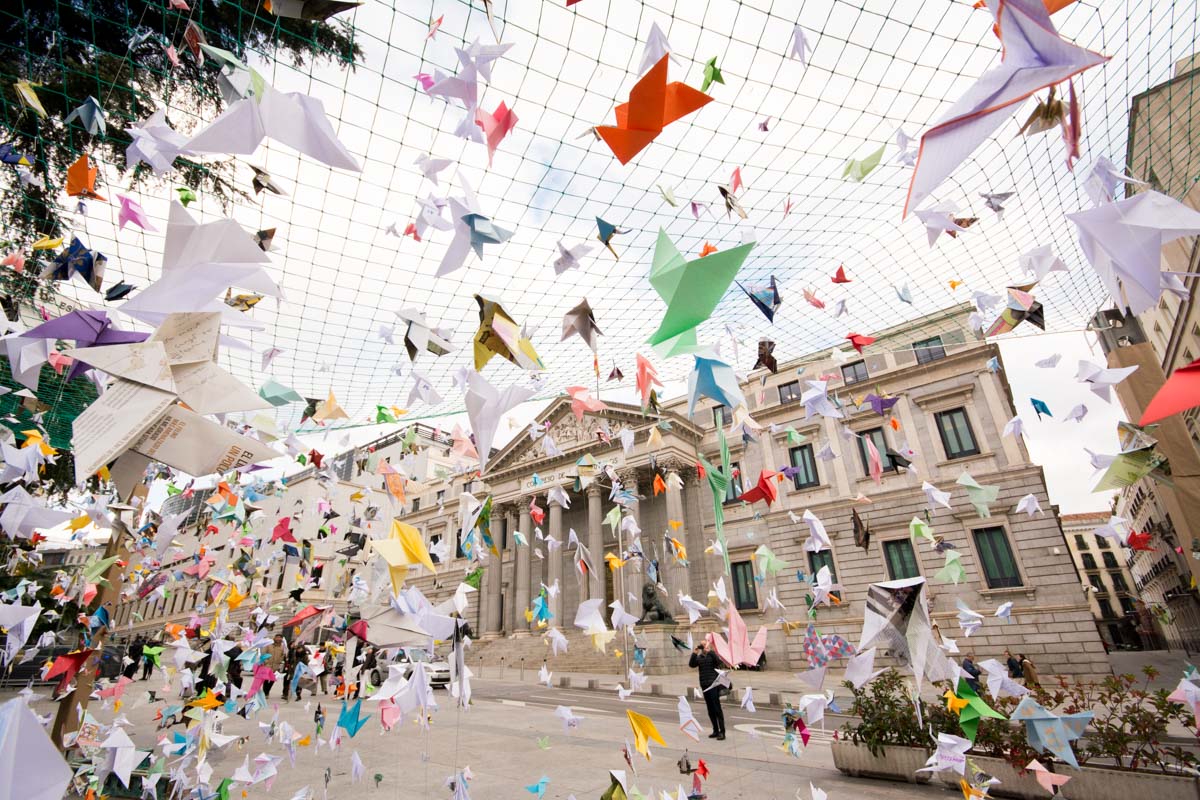 Posted at 13:54h in Uncategorized by Craftivist Collective 2 Comments
1 Like

Chris went on to say: “Sarah and the Craftivist Collective ideas provided inspiration for WWF’s successful global #OrigamiMigration for the threatened Donana World Heritage site. The #OrigamiMigration, a part of WWF’s global Save Our Shared Heritage campaign, provided a creative, playful, way for thousands of people to voice their views. WWF used these with the Spanish government and UNESCO to demonstrate the passion people have for the future of the wetlands World Heritage site for the people and birds that rely on its protection. Dredging in the site was cancelled after the #OrigamiMigration event outside the Spanish Parliament.”

I recently delivered a talk and workshop in the WWF HQ in Surrey to staff and the public in their incredible eco building: The Living Planet Centre. It was part of the book tour. It went really well with a full room and wonderful feedback via Twitter that night. I received an email from WWF Communications Manager Roberta McIntyre that night just before the event to say that she was ‘gutted’ she could not attend the event. She then went on to say

You may have seen our #OrigamiMigration campaign last year, which was largely inspired by your ideas about gentle protest. Our supporters sent in thousands of origami birds to us in a show of support for Doñana National Park, a World Heritage site in Spain. The birds then went on ‘migration’ to Madrid where they formed a beautiful display outside the Spanish parliament – see attached. The idea was to show the Spanish government that people around the world wanted to protect this World Heritage site from the planned river dredging which would have threatened the millions of migratory birds that rely on its biodiversity. It worked: the government responded to our campaign by cancelling the dredging plans.

So, I just thought you’d like to know about the success we’ve had with craftivism and our own supporters. The #OrigamiMigration is constantly being held up as a good example of effective activism here. Really wish I could be there for your talk, and good luck!

It’s often difficult for any craftivist or activist see the effect your actions have. Sometimes you are told you have had an impact from people who want to please  you when you  might to have changed their ways. More often than not you’re told by power holders that you have had no impact because they do not want you to encourage campaigning. 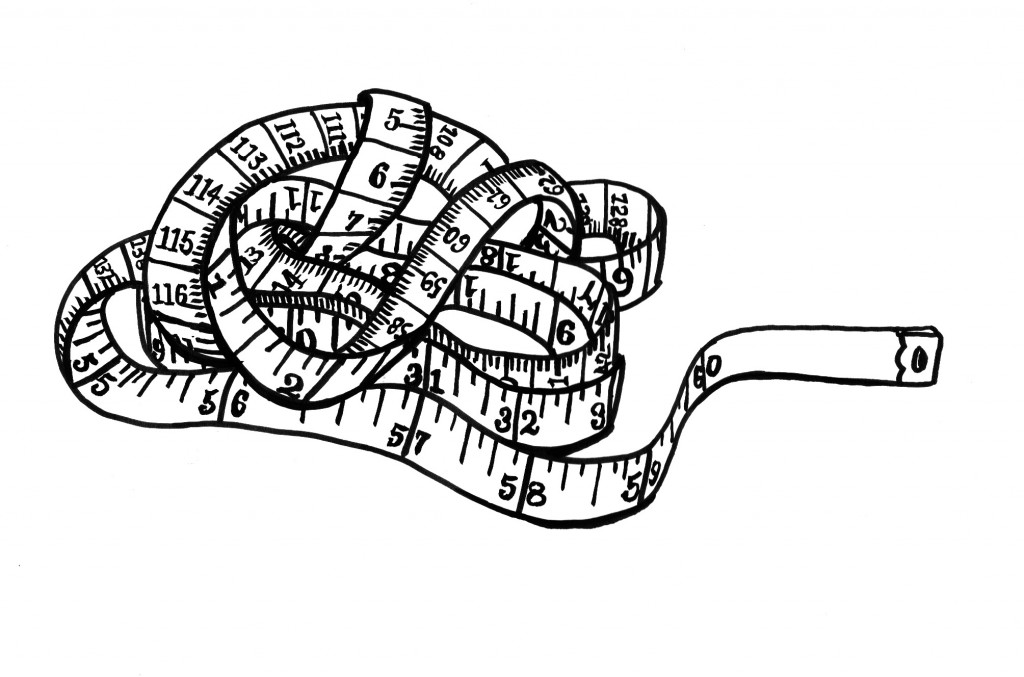 Our ‘gentle protest’ approach to craftivism focuses on transforming hearts and minds as well as changing policies, cultures or behaviours. This can make it even more difficult to measure success or impact. It’s emails like this and from individuals saying how our work has helped them live more intentionally and ethically, or have the confidence to protest more and in a loving way, meet their local political representative on an issue they care about or create a campaign of their own that I keep in my ‘Happy Folder’ in my email inbox. When I am overwhelmed by the pain and suffering the newspapers share with us and I just want to scream on the streets rather than stitch a gift for someone whom I fiercely disagree, I often look at these emails and it motivates me to keep going, keep sewing the seeds and not give up hope. As a craftivist you may never fully know the impact your actions are having but if you do your craftivism with courage and care you might receive an email like this to put into your ‘Happy Folder’ soon 🙂

For more information on our craftivism success stories big and small check out the last chapter (Chapter 18) of How To Be A Craftivist: the art of gentle protest 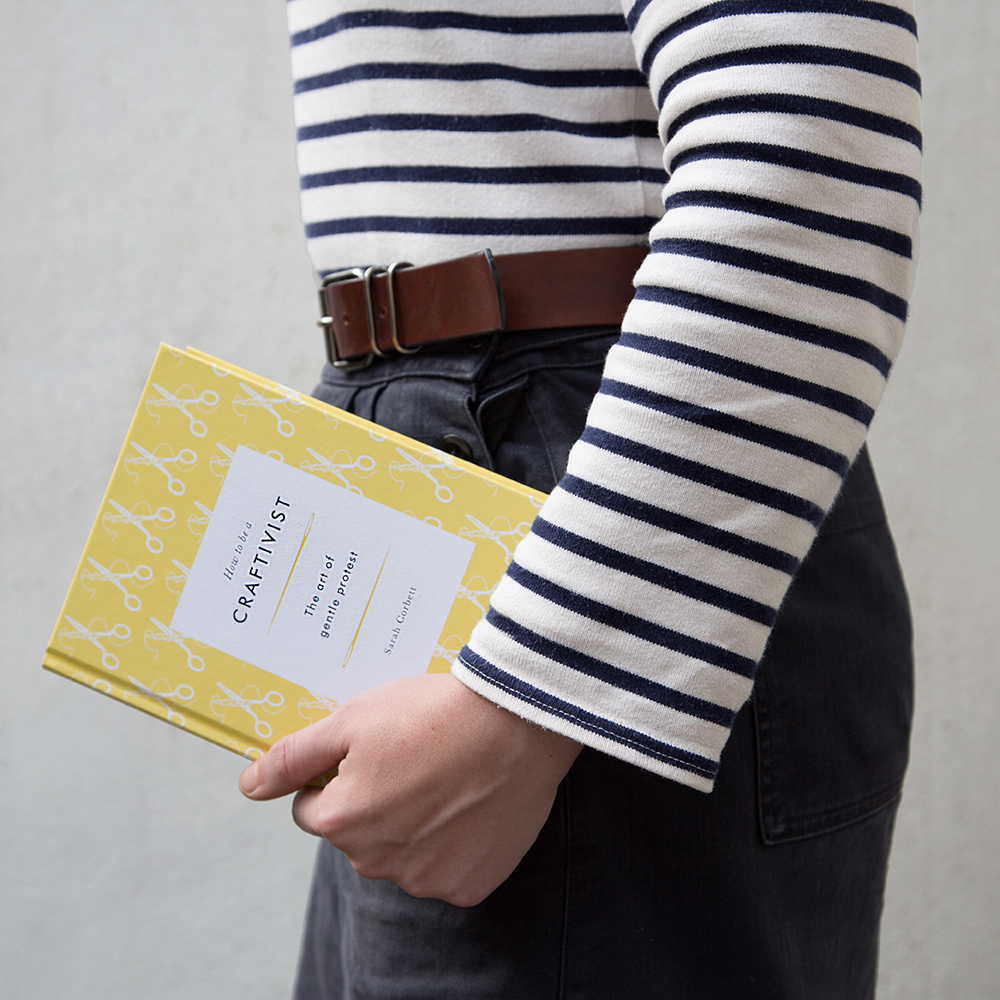 You can also download our Craftivist Manifesto below or order a beautiful letterpress printed (by The Letterpress Collective, Bristol) special edition A3 print (only 41 out of 100 printed left) in our online shop here 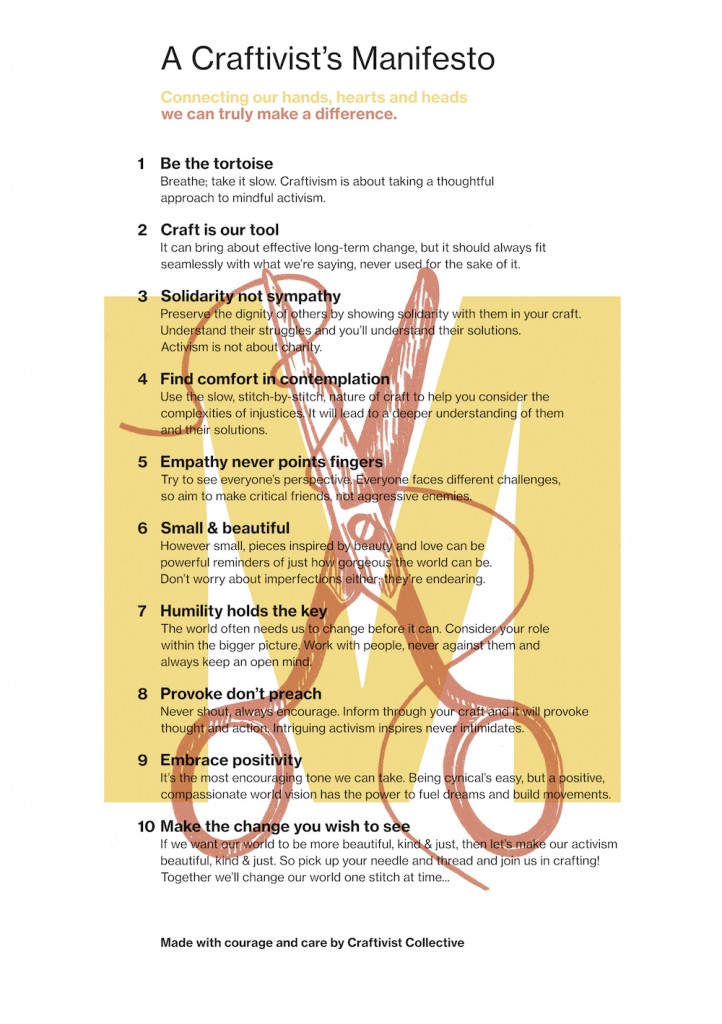 Here is our manifesto you can download or order one of our Special Edition letterpress printed A3 copies from www.craftivist-collective.com/shop