Home / Worth writing about… / Event / It’s not just a job, it’s an M&S job… that should pay a Living Wage

It’s not just a job, it’s an M&S job… that should pay a Living Wage 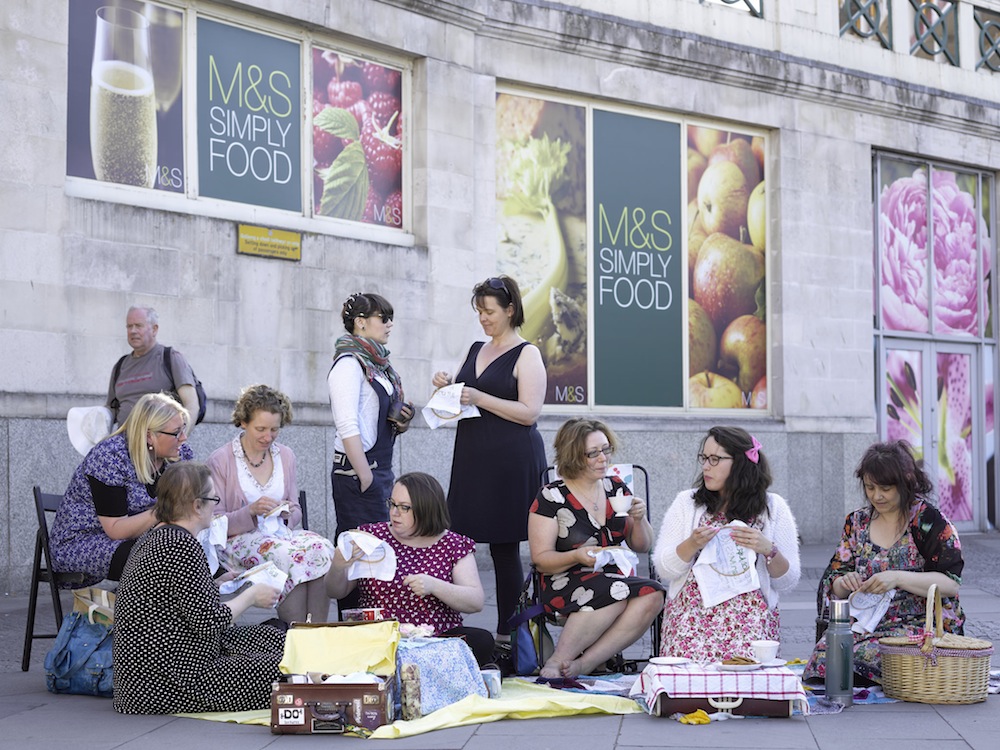 Posted at 11:52h in Event, Projects by Craftivist Collective 0 Comments
1 Like

“What happened in the meeting?” many of you tweeted, asked on Facebook, instagram and via email. Here’s what we can tell you wonderful craftivists:

Our meeting was 4pm-5pm on Thursday 14th January 2016 with Mike Barry, Director of Sustainable Business at Marks and Spencer. We met in the ShareAction offices on Crucifix Lane and Mike brought a long David Leach, Government Affairs Manager, of M&S.

The meeting was with our friends also working on this campaign: Citizens UK, ShareAction and a big investor in M&S which takes part in the Investor Collaborative for the Living Wage. We limited how many people came so we didn’t overwhelm M&S but still show our diverse alliance and different perspectives – this eclectic mix only helped strengthen this campaign. 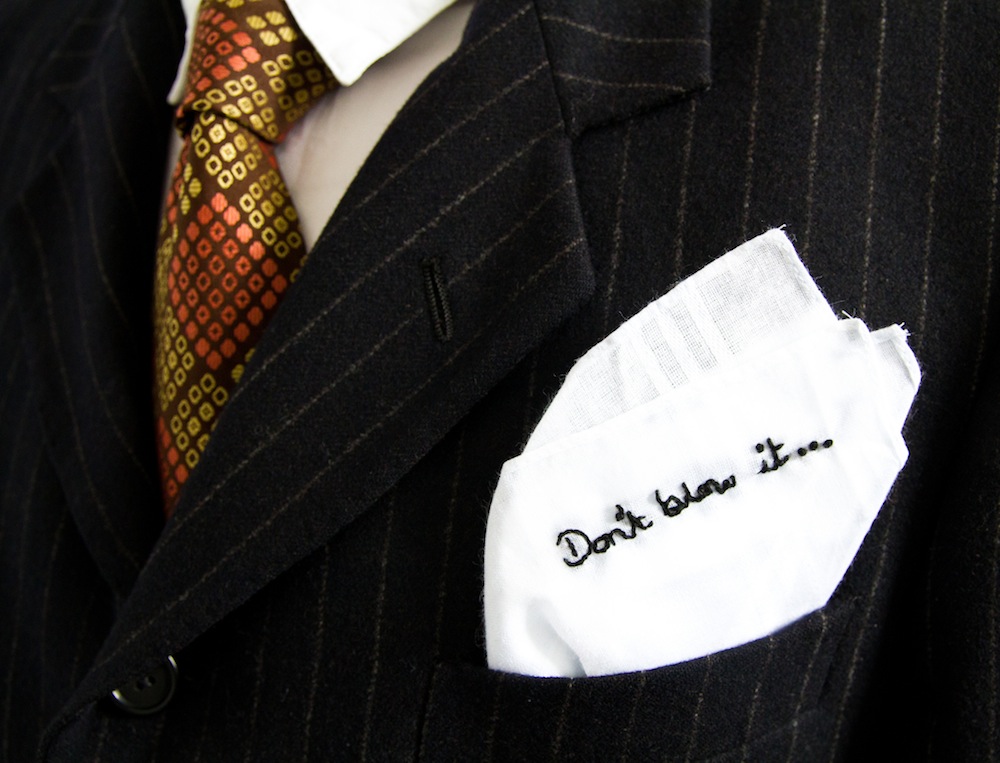 We went into the meeting in a strong position. Our AGM action (more info here) had successfully put the Living Wage firmly on the agenda at the top level of the company with help from our bespoke craftivism hankies for each board member. July’s budget announcement of a ‘national living wage’ added a further spotlight and awareness in the public of the Living Wage and problems in the retail sector.

Thanks to everyone who tweeted @MarksandSpencer and M&S Director of Sustainability @PlanAMikeBarry in the lead up to our meeting. Those small actions really helped show our commitment to encouraging Marks and Spencer to implement the Living Wage (from Living Wage Foundation) and mobilising around this issue.

All of the above helped give the meeting weight. The meeting was a positive next step in this campaign and helped us see where we had common ground, where M&S are up to in their investigation into implementing the Living Wage and where to focus our efforts. M&S seem to recognise the business benefits of treating people fairly and told us they have been considering the Living Wage at the highest level (meaning with the previous CEO, board members, directors and committees). They told us that their new CEO Steve Rowe who officially starts in April, hopes to make real progress on this. 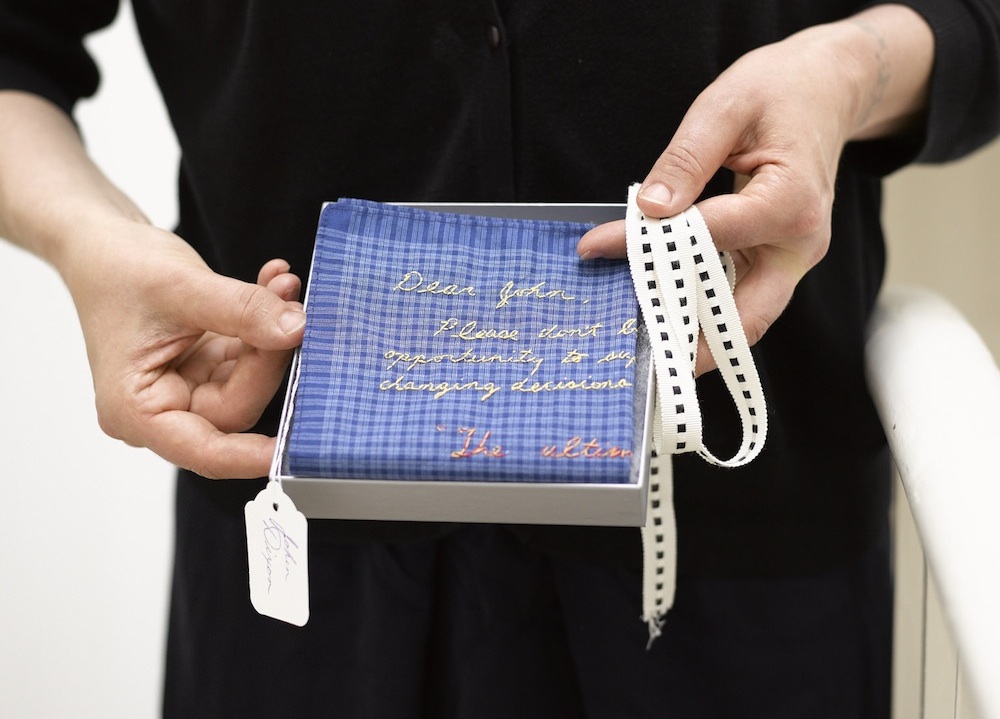 One of 14 hankies for M&S Board members in boxes with tags, ribbon & a handwritten letter inside as well as more info on the campaign

We heard repeatedly from Mike that M&S are determined to be a leader in being a great place to work and he is open to the fact that the Living Wage may be a key element in this goal. With nearly a third of the FTSE 100 and more than 2000 employers accredited as paying the Living Wage (including chains such as Oliver Bonas, Lidl, Ikea and many others), we made it clear that  the Living Wage now forms an important part of what makes the best employers.

However, despite the repeated message that people are at the heart of the business, we want to see clear evidence that M&S are looking into the nitty gritty of what it would look like for M&S to adopt the Living Wage. The HR Director was unable to attend the meeting who would lead on a lot of what was discussed. We hope canadian healthcare online pharmacy they can come to the need meeting we are setting up. We were told that the discussions were happening internally but at one point we heard the phrase “charity begins at home.” The Living Wage is not a charitable consideration. It’s about business strategy. 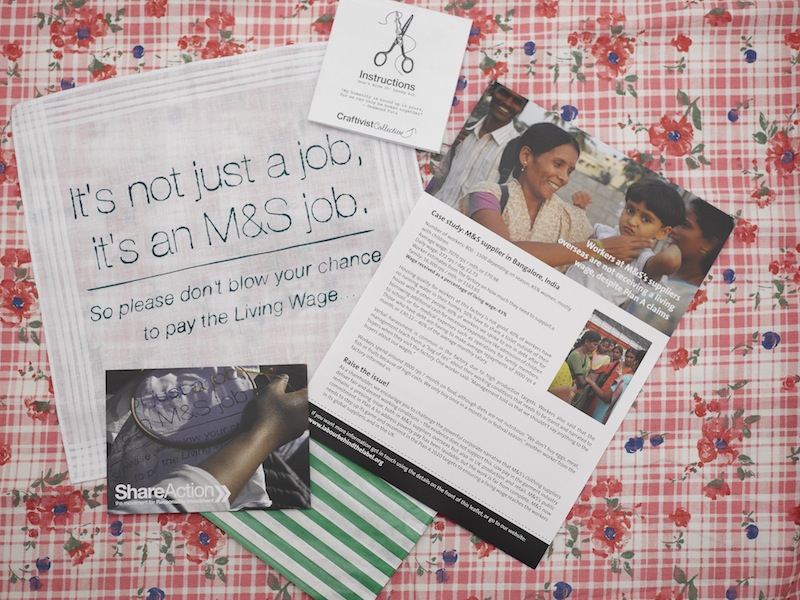 content of the Living Wage craftivism kits for 250 Marks and Spencer shareholders (excluding needle & thread but they were in the kit too of course) at the AGM 2015. Photo by Polly Braden

Despite not getting a concrete outcome from the meeting, Lisa Nathan, Programme Officer for ShareAction who is leading on this campaign tells us:

“The meeting was a very positive discussion with M&S about how they’re looking at moving towards the Living Wage. It was fantastic to have such a diverse group of stakeholders in the room, including our campaign partners Citizens UK who spoke to the community power behind the Living Wage, a major institutional investor who argued for the business benefits of adoption, and of course the Craftivists who brought to the table the personal stories of all the committed individuals who dedicated the time to make the board and shareholders hankies with their vision that the M&S they know and love would lead the way on the Living Wage. There’s still a long way to go, but we’re hopeful that meeting again in March will allow discussions to pick up the pace for 2016.”

These things can take a while but we are determined to keep the pressure on M&S to be that pioneering, leading and loving company we all know it can be.

But we still need your help: 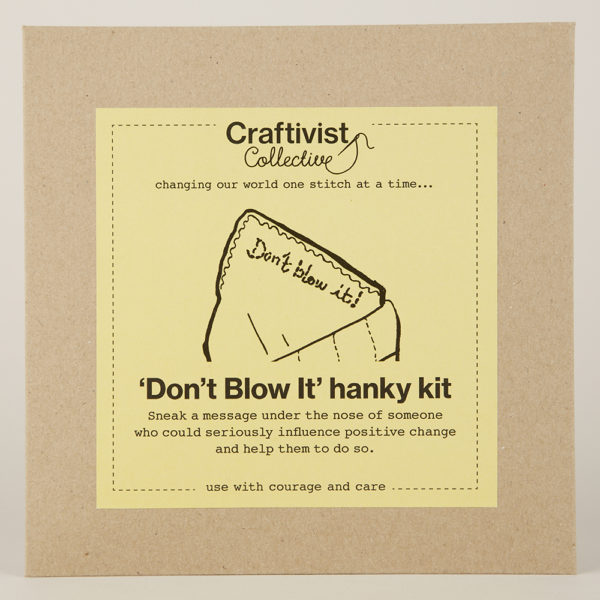 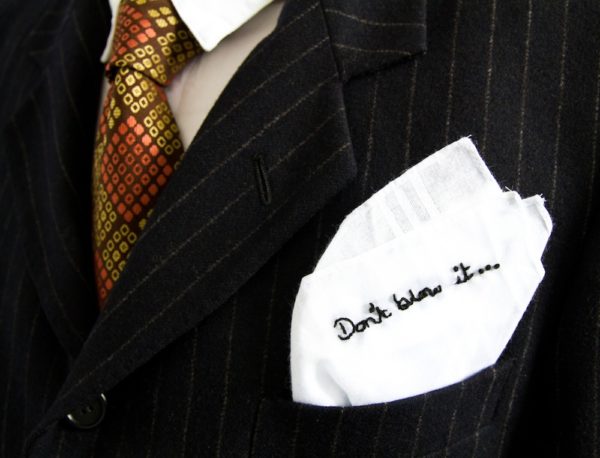 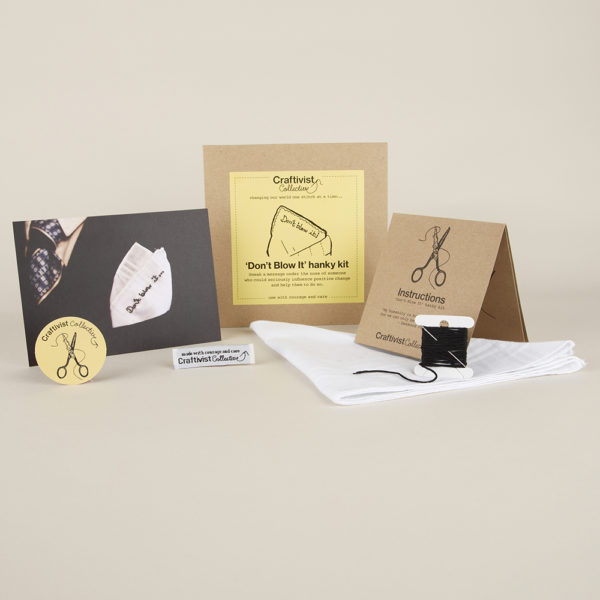 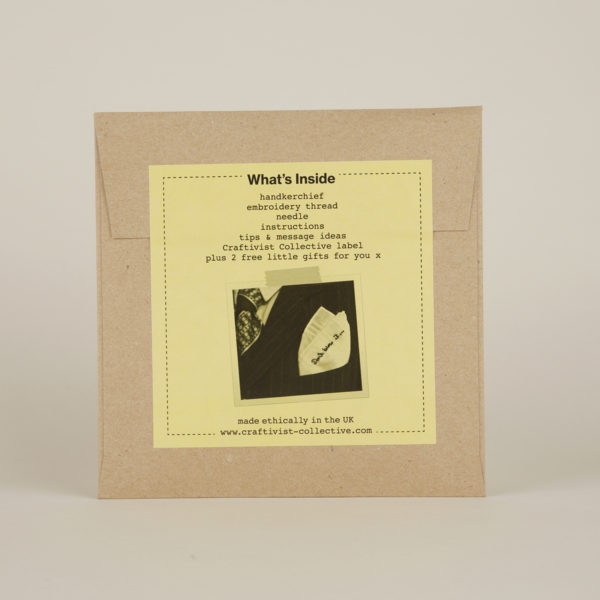 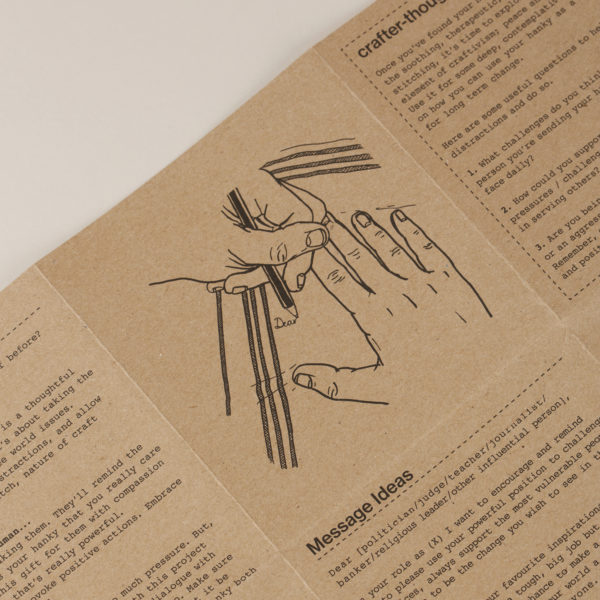 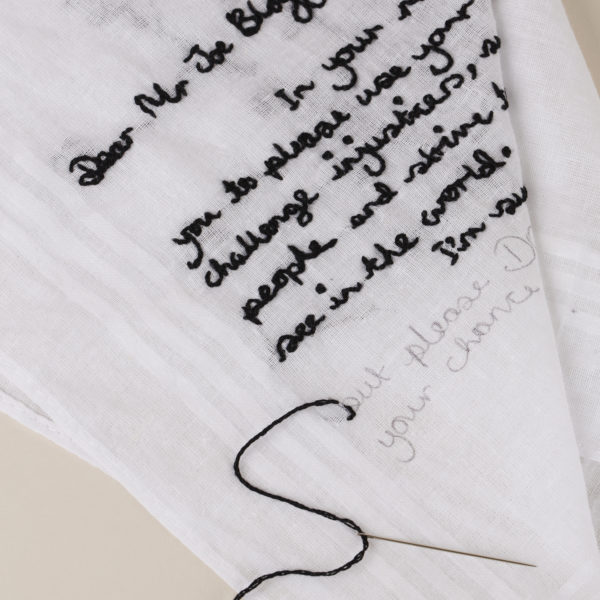 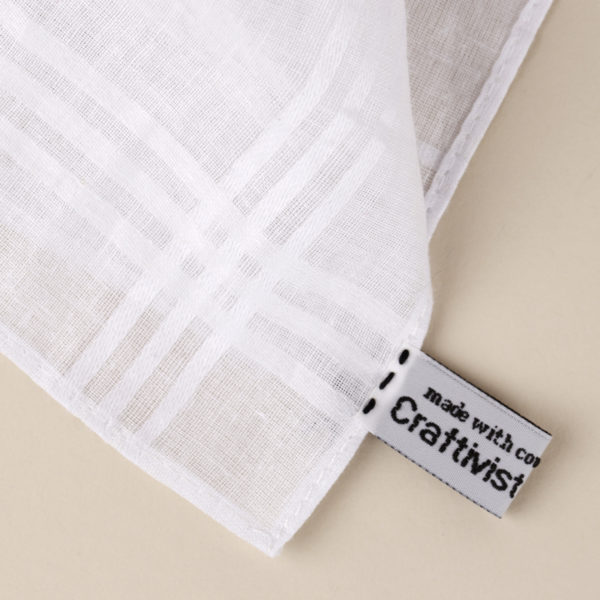 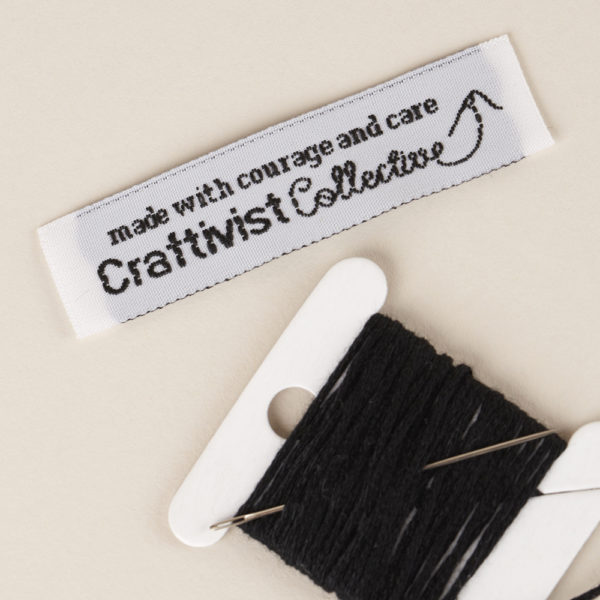 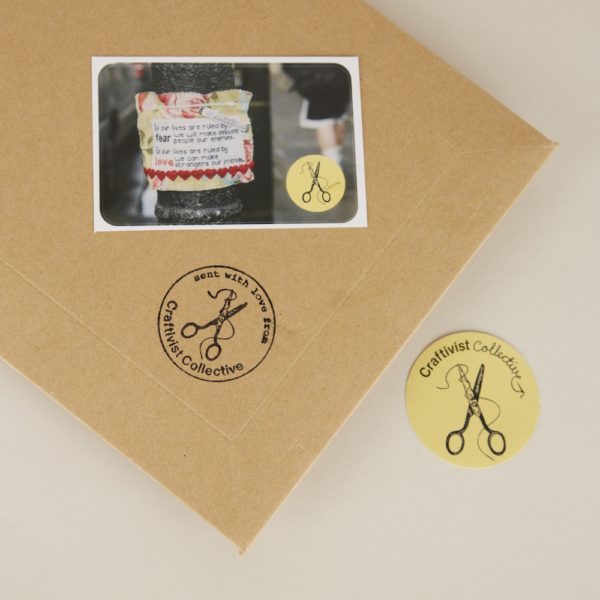 Sneak a message under the nose of someone who could seriously influence positive change and help them to do so.

More info on the project here

All profits go to help sustain and grow the collective’s activities to engage people in craftivism and support people to be the change they wish to see in the world. Win win!:)

Embroider a personal and timeless message on a handkerchief, which you can then give to an influential person such a a politician, journalist or religious leader, to encourage them to use their power and influence to make a positive difference. Be their critical friend rather than an aggressive enemy. It’s much more powerful.

Use with courage and care

All profits go to help sustain and grow the collective’s activities to engage people in craftivism and support people to be the change they wish to see in the world. Win win!:)

There are no reviews yet.

If you value our work please consider supporting us to continue to do it.